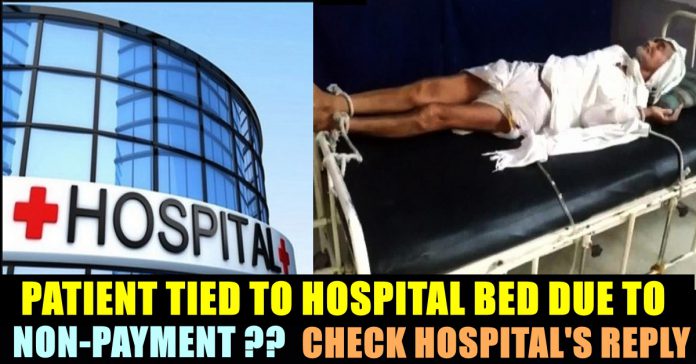 Patient Tied To Bed In Hospital Due To Non-Payment ??

In the incident which grabbed the attention of the Chief minister of Madhya Pradesh, a hospital allegedly tied an 80 year old patient to a hospital bed due to non payment. However, the hospital denied the claims and said that the man was having convulsions and was tied down so that he doesn’t hurt himself.

Family of the man alleged that the incident happened right after they failed to make a payment of amount Rs.11,000 for his treatment at the City hospital in Shajapur.Daughter of the 80 year old patient said that they paid a bill amount of Rs.5000 initially while admitting her father. “When the treatment took a few more days, we did not have to money to pay bill” she said to the media.

This news created a massive furore in the north region as chief minister of Madhya Pradesh Shivraj Singh Chouhan reacted to it by saying that the culprits will be punished in right way. “A case of cruelty with a senior citizen in a hospital in Shajapur has come to notice. The culprits will not be spared, strict action will be taken,” Chouhan said in his tweet.

The man was admitted in the hospital due to stomach ailment earlier in the week. The patient was allegedly tied to the hospital bed when the family members were unable to pay the hospital bill and urged the hospital administration to discharge him. Virendra Singh Rawat, Shajapur district collector, said that a team has been sent to hospital to investigate the matter and a police probe is underway.

Madhya Pradesh: An 80-yr-old man found tied to bed with rope at a hospital in Shajapur allegedly over non-payment of hospital bill. Dist Collector says,‘We’ve sent a team to hospital to investigate matter. Police probe on. Report awaited. Action will be taken accordingly.'(06.06) pic.twitter.com/fWaY4nIi5z

A latest report has said that the hospital had waived off the man’s bill on “humanitarian grounds”. This incident has created waves is social media as people who couldn’t believe the claims made by the hospital started raising voice against the hospital management demanding them to act with compassion towards patients at a situation like this.

A woman in Karnataka's Davanagere city thrashed a bank manager for allegedly asking for sexual favours to approve her loan. In shocking visuals exclusively accessed...