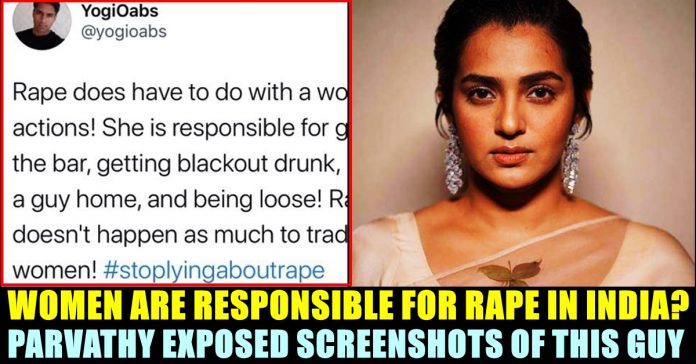 Blaming women equally or above equally to a man in a rape incident is slowly becoming into practice, especially after the arrival of social media where people are effortlessly making statements against women by reasoning their clothes for a crime like rape. Now, actress Parvathi who is known for acting in films like Mariyaan, Uthama Villain has came up with a series of screenshots exposing a man who blatantly schooling women on “How not to get raped” through his social media account.

The man who got exposed by Parvathy says “I teach women how to behave and coach men on traditional masculinity” through his bio in twitter. To a female’s twitter post which says that rape doesn’t have anything to do with victims, the man replies that rape does have to do with a woman’s actions. “Rape doesn’t have to do with what we are wearing or what time we chose to go out !! We have freedom of movement !! So should we now be scared to exercise our rights just because rapists wouldn’t stop raping ?? It has to do with the rapists not the victim” a woman’s posts reads to which this guy named Yogi Oabs says “Rape does have to do with a woman’s actions ! She is responsible for going out to the bar, getting blackout drunk, bringing a guy home, and being loose ! Rape doesn’t happen as much to traditional women !” Stop Lying About Rape”

In another screenshots he can be see posting pictures of phrases like “Feminine women like being possessed by a strong man” and “Behave, Women”. Check out the screenshots shared by Parvathy below :

Sharing these screenshots, Parvathy asked her followers to report and block him. “The world would be a better place without the venom you spew. Fuck off!!” she wrote in her post. “As if there isn’t enough toxicity we’ve to deal with, here is a #serialmisogynist alert! Please report and block
@yogioabsHe has taken it upon himself to “teach women how to behave” and supports rape. Unabashedly. Unfortunately he does have a following and that is dangerous.” Parvathy wrote in her next post.

As if there isn’t enough toxicity we’ve to deal with, here is a #serialmisogynist alert! Please report and block @yogioabs
He has taken it upon himself to “teach women how to behave” and supports rape. Unabashedly. Unfortunately he does have a following and that is dangerous. pic.twitter.com/RjrTGH9Lkg

These are screenshots from his page twitter and instagram pages.I request you all to report and block. @yogioabs the world would be a better place without the venom you spew.Fuck off! #reportandblock #serialmisogynist pic.twitter.com/p7Z2Su7wh9

This post from the actress received widely positive response from her followers as many of them started reporting him. Few even trolled him with the screenshots of his other tweets and activites :

I am sure he is an attention seeker. He is even RTing tweets of people who are opposing him. pic.twitter.com/ubSkIrBFhJ

However, he is not the first or only person to claim such things as we have seen so many men and even women blaming the victim in a rape incident for their clothes and choices they make. It is high time for them to realize that it all depends on the upbringing of their male kid. The mindset of parents who are teaching their female kids on how not to get raped should change. Instead they should take the responsibility of teaching their male kids about the word “Consent” to stop such crimes in the future.

A shocking video of a woman trying to kill herself in front of actor Ajith kumar's house is going viral in social media platforms....

On the 4th of September, Big Boss Tamil 4 Contestant Shivani Narayanan has posted proof of her acting in the movie ‘Vikram’  directed by...