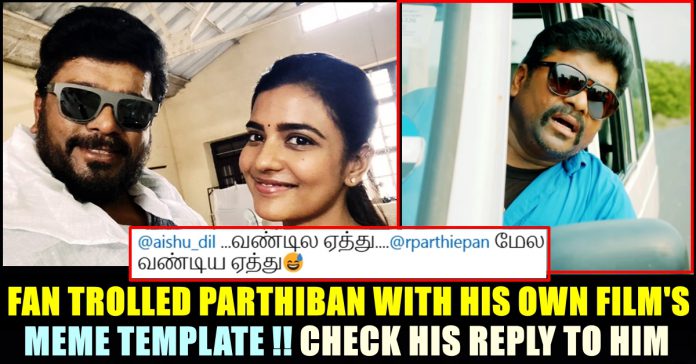 Parthiban Replied To A Cheeky Comment Of His Follower !!

Being introduced to Tamil film industry in 1980’s, Director/Actor Parthiban is most probably the only Tamil celebrity who has 40 years of experience in films and also active in social media platforms, especially in interacting with his followers. The filmmaker who is still competing with the new gen filmmakers with his products, is also giving them a tough time in social media when it comes to updating daily routines and about future plans.

His recent reply to a fan who tried to troll him by using a popular meme template from his own film is trending now with more than thousand likes in Twitter. Apart from directing quality films, Parthiban is also concentrating in building his acting profile till date. He is also having a decent rapport with the actors and technicians of this era.

The creator who enjoys more than 14 lakh followers in Twitter, on Sunday uploaded a picture of himself with actress Aishwarya Rajesh and lauded her for humble nature and beautiful looks. He wrote “The girl next door மாதிரி இல்லாமல் the girl inside our doors போல… தன்மையான,எளிமையான திறமையான ஐஸ்வர்யா ராஜேஷ்!” and posted a selfie picture in his official micro blogging social media site.

As we all know, we can’t expect a 100% of positivity in social media, especially when you are a successful personality from cinema industry. There will be trolls, hatred, criticisms and it all depends on the one who is in the receiving end whether to react to it or to ignore. One of a fan who had the courage to troll the 62 year old actor, brought a popular meme template from his own film “Naanum Rowdy Thaan”

To this comment, unlike other celebrities who could have blocked the user or replied to him with harsh words, Parthiban simply asked “Enakke vaa”

This casual behaviour from one of the most experienced personality won hearts of many of his followers. Check out some of their reactions below :

Known for his uniqueness, the director always interested in making films which are progressive. The man who amused Tamil cinema audience with his creations, recently came up with an unique film which revolves around only a single man. The experimental venture “Oththa Seruppu” received high praise from the audience and from the critics. As his next project, he is planning to make a single shot film titled as “Iravin Nizhal”.