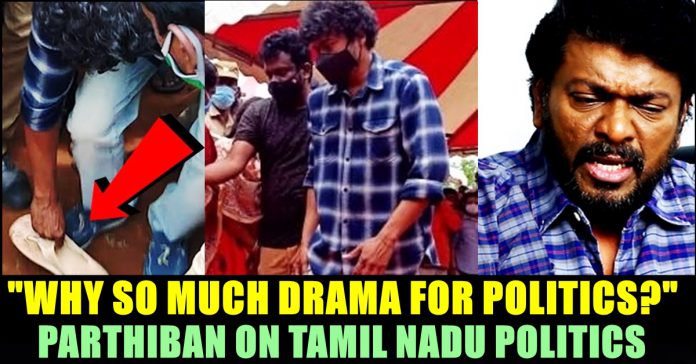 While returning after paying his last respect to legendary singer SP Balasubrahmanyam, a humble gesture of actor Vijay grabbed headlines. The actor picked up a slipper of his fan which fell off in his way and handed it over to him. Impressed fans lauded their favourite star for the way he behaved and started trending hashtags in social media platforms to express their love towards him. They claimed that Vijay is only top-tier actor who could act in this way with his fans.

When Vijay arrived at the farm house, there was a huge crowd of fans but the security assured that Vijay was escorted safely and he offered his condolences to SP Balasubrahmanyam’s son Charan. At that time, a fan’s footwear slipped and fell down, reacting instantly, Vijay took the footwear and handed it over to the fan. The humble gesture from the actor, garnered massive attention from the Internet users.

In a heart winning gesture, #ThalapathyVijay bent down and picked the slipper of one of his fans and handed it over to the fan while walking back to his car after paying last respects to SPB. He didn't let the cops pick it.

This is my THALAIVAR! 😭🙏 pic.twitter.com/aVrbTwr1I9

Meanwhile, a set of people including politicians from leading parties said that the actor is doing it for publicity as he is going to enter active politics soon. Now, questioning their allegation, Director and actor Parthiban said that their statement is baseless. He said that there is no necessity for Vijay to attend a funeral to increase the mileage for his politics which is far from today.

“To become Chief minister in future, one would go to a funeral today ? Is it that necessary. Our today’s politics requires that much drama ? What is the profit through that ?” the filmmaker questioned the critic’s statement.

He went on to criticize the rift in the ruling party of Tamil nadu. “If there is a ruling party, there will be an opposite party. But in our state, a opposite party exists inside the ruling party.” said Parthiban who added that no one is seeking solution for the problems of people. “Today’s politics only creates debates but no solution” he said.

Previous article“Don’t You Feel Ashamed ?” – Shivani Questioned The Female Who Made Cheap Trolls Against Her
Next articleKedar Jadhav Is Trending Nationwide !! You Must See Why

Tollywood star Vijay Deverakonda was catapulted to fame after delivering three hits in a row. It was Pelli Choopulu which marked his entry as...

Prashant Bhushan, Lawyer and activist, has been fined Rupee. 1 by the Supreme court. He has been asked to pay the fine about by...