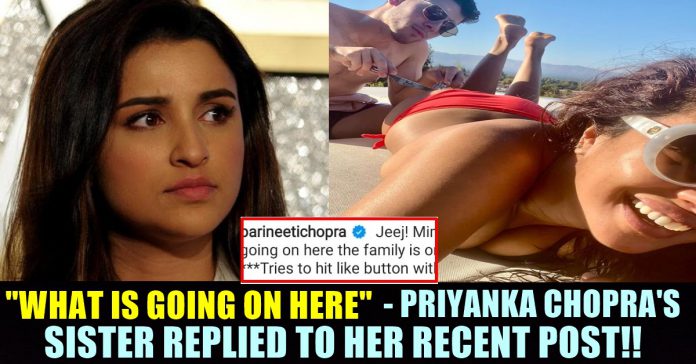 Priyanka Chopra is a worldwide famous actress. She was the winner of Miss World 2000. She then made her entry into cinema. She made debut in the Tamil film Thamizhan starring opposite to Vijay. In bollywood she has acted in movies like Bajirao Mastani, Barfi, The Sky is Pink, Mary Kom (biopic of Mary Kom), and many others. Slowly, she entered hollywood and made a place for her. Priyanka Chopra has also released her memoir, Unfinished. married the American Singer and Songwriter Nick Jonas. She and Nick Jonas were trolled during their marriage as Priyanka is 10 years elder to Nick.

Parineeti Chopra is one of the leading actresses in Bollywood. She is also a cousin of Priyanka Chopra. Both of them have a huge liking among the people. People are fond of their movies and interviews. Parineeti Chopra has acted in movies like The Girl On The Train, Saina (Biopic of Saina Nehwal), Hasee Toh Phasee, Meri Pyaari Bindu. She is also recognized as a singer.

Priyanka Chopra married the American Singer and Songwriter Nick Jonas. She and Nick Jonas were trolled during their marriage as Priyanka is 10 years elder to Nick. This has not affected the couple in anyways.

Priyanka and Nick Jonas are quite active on Instagram. They are considered by many of their fans as the relationship goals setters. They never failed to capture their moments and show it to the world. Priyanka Chopra has posted selfie of a puckish moment with her husband and has captioned “Snack 🍴❤️”

Parineeti Chopra, has replied to the post. This has gained the attention of many of their fans. She has asked “Jeej! Mimi didi! What is going on here the family is on instagram 😱 ***Tries to hit like button with eyes closed”

Many people have replied to Parineeti’s replies.

Previous articleTN Mother Was Arrested For Attacking 2-Year Old Child After Having An Affair With A Man
Next articleFans Attacking Jimmy Neesham For Mentioning About India’s Population !!

The Bigg Boss 2 Tamil episode began with ‘What a Karvaad’ song and goes downhill from there, especially for the women in house. First,...