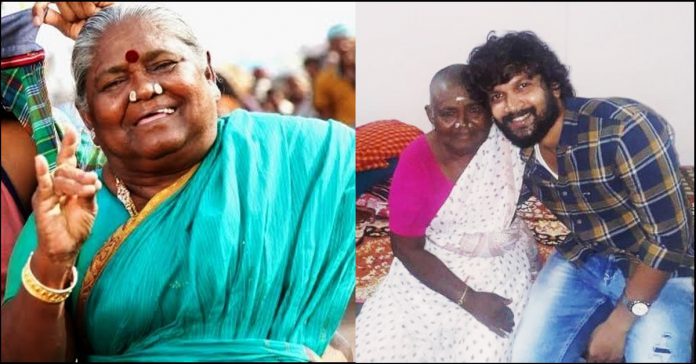 “Paravai Muniyamma” is known among Tamil cinema audience for her unique way of singing and for her onscreen appearances in films like “Dhool” , “Maan Karate” etc. Being a folk singer, Paravai Muniamma received Kalaimamani award from Tamilnadu government recently for her achievements in the year 2012.

Paravai Muniamma was once a busy actress in Kollywood who appeared in 84 films. She was last seen in “Royapuram Peteru” song from Sivakarthikeyan’s “Maan Karate”. Recently a report on her health condition becoming critical spread widely in social media. Now, Velammal Medical College Hospital and Research Institute, in which she was admitted earlier, released a statement saying that the artist is recovering faster and her health condition is getting back to normal state due to continuous monitoring and treatment. Actor Abi Saravanan met “Paravai” Muniyamma lately and reported about her health condition, videos and photos of which were widely circulated in social media platforms.

They also announced that the hospital management will bear the expense of her entire medical treatment. “With the treatment of Velammal’s doctors, Paravai Muniyamma is recovering well. She will return to home very soon after getting cured completely.” said the statement.

According to reports, Ishari K Ganesh, chief of Vels film International intervened in the health issue of “Paravai” Muniyamma and with the help of him, she got admitted at Velammal. Going by the report of One India , Paravai Muniyamma even spoke with a person saying that her health is fine.

It is notable that she was hospitalized two years back and Chief Minister Jayalalithaa had helped under MGR welfare scheme by arranging 6 lakhs fixed deposit in her name. Through that fixed deposit, Muniamma received 6,000 per month as interest.

Let us pray for Paravai Muniyamma to get well soon and act in movies as she did in her earlier days !!

New CCTV Footage Of Srimathi Being Carried From The Spot Surfaced !! WATCH

A new CCTV footage that shows a group of people, presumably the teachers of the Sakthi matriculation school allegedly carrying Srimathi from the spot...

Young and emerging filmmaker Karthik Naren's tweet about his come back through the upcoming anthology film "Navarasa" had garnered huge attention among the fans...