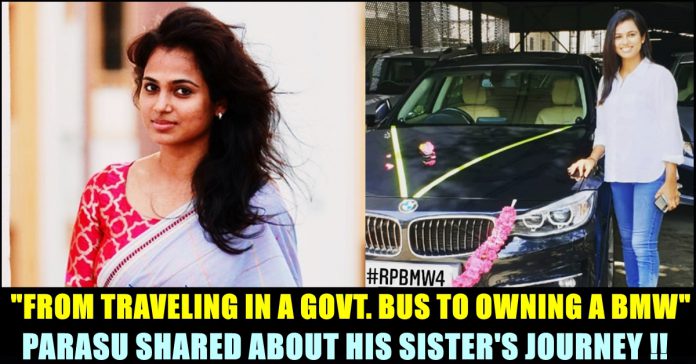 Ramya Pandiyan’s brother Parasu Pandiyan who entered the Bigg Boss house to see his sister during the freeze task, on Wednesday, shared about his sister’s immense achievement of buying a new luxury car in his personal social media account. After wishing her in Superstar Rajinikanth style, Parasu mentioned about his sister successful journey of travelling in government bus 10 years ago and owning a new luxury car now.

Ramya Pandiyan who was highly believed to win the trophy of Bigg Boss season 4, ended up as a third runner up. She who is a daughter of director Durai Pandiyan, entered film industry by acting as a female lead in the critically acclaimed film titled “Joker”. After acting in a number of films such as “Aan Devathai”, Ramya Pandiyan’s social media presence helped her to attain limelight.

She rose to fame among the social media users through the pictures surfaced in the internet from her terrace photo shoot. Her stints in the shows of Vijay Television such as “Cooku with Comali”, “Bigg Boss”, “Kalakapovathu Yaaru” were impressive as well. In Bigg Boss show, Ramya grabbed the attention of the viewers by expressing her opinions for the appropriate issues.

Now, according to a social media post of her brother “Parasu Pandiyan”, Ramya has bought a new luxurious car. Through his caption, Parasu imitated Superstar Rajinikanth’s narration about buying his first car in a film event. In that event, Rajinikanth explained how he got humiliated by a film producer and proved himself by buying a car.

On the work front, Ramya Pandiyan recently announced that she got committed to a project which is going to be bankrolled by actor Suriya’s 2D Entertainments. The film is also going to have actress Vaani Bhojan. “I’m happy to officially announce my next project with 2D Entertainment @rajsekarpandian sir, directed by @arisilmoorthy. Special thanks to @actorsuriya sir and the entire team for this wonderful opportunity” Ramya said while announcing about the project.

When A Follower Asked Samantha To Divorce Her Husband !! Check Her Reply

Samantha is one of the prominent South Indian actresses who never shied away from expressing her opinions in Public. Be it right or wrong,...