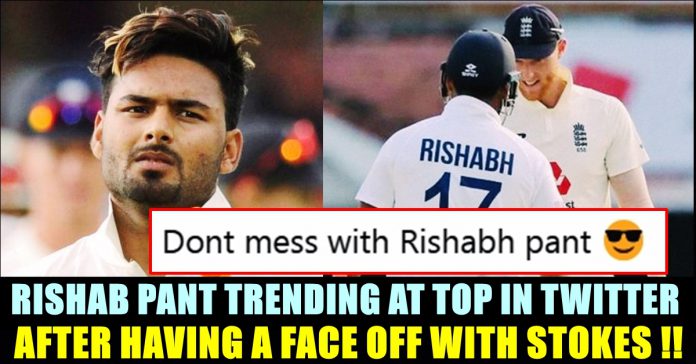 After having a face off with English all rounder Ben stokes, Rishab Pant is trending in internet with reactions from Indian fans lauding him for his never give up attitude. The incident turned out to be the first confrontation of the series between two players. During the end of day 1, Stokes and Indian keeper Pant were involved in a heated exchange of words at the MA Chidambaram stadium of Chepauk, Chennai.

To make the 87th over of Captain Joe Root as the last one of the day in order to save wickets for the next day, Rishabh Pant took his own time in between the deliveries. Irked by this strategy of the left hand batsman, Ben Stokes who was standing at the first slip, appeared to have said something to the 23 year old.

Instead of ignoring him, Rishab Pant stood against Ben Stokes and refused to bat. He demanded the chatter of Stokes to end to continue his batting. When the chatter finally ended, Pant played out the last two balls. However, it didn’t end there.

During the last over of the day, the duo again involved in a heated argument. Both the on field umpires intervened and restricted them from fighting with each other.

Check out some of the several other reactions below :

As a player there’s nothing better than crowd chanting your name, pant boi you deserve this. 🤴

India lost three wickets in the final session but was still in a strong position at 300-6 at stumps on the first day of the second Test. Rohit Sharma (161) scored his seventh test century and put on 162 runs with Ajinkya Rahane (67) for the fourth wicket. Both batsmen were dismissed after tea as England fought back.

Rishabh Pant (33) and Axar Patel (5) are the batters at the crease. Rahane brought up his 23rd test half-century off 104 balls. Sharma was motoring along at the other end, crossing 150 off 208 deliveries.