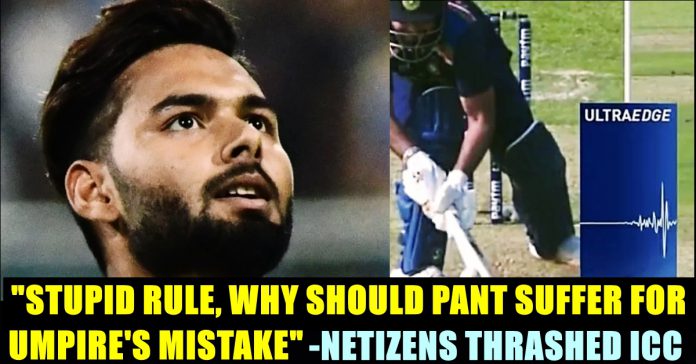 After Pant denied four runs for a blunder committed by the umpire, netizens fumed at the International Cricket Council by saying that the rules structured by them are flawed and biased. Amidst the heated discussions over the umpire’s call in DRS and the soft signal, a baffling rule in the sport agitated the fans across the country.

In the second ODI between India and England, Rishab pant smashed a 40 ball 77 and helped team India to reach a massive total of 337 at the end of 50 overs. However, Pant’s score should have been 81 off 40 balls, felt the fans of team India as a boundary that went off his bat was denied due to a wrong decision made by the straight umpire.

In the last ball of 40th over which was bowled by Tom Curran, Rishab Pant who was hitting the ball cleanly was on strike. The left hand batsman attempted his favourite shot of reverse lap which he successfully executed against Jofra Archer and James Anderson in T20 and Test series respectively. However, he misjudged the ball and it edged the wrong side of his bat and went for four.

In real time, it looked like the ball was hitting his pad and sneaked past the leg stump for four. When Tom appealed for an LBW to the umpire, the latter gave it an out and Pant went for DRS immediately. In TV replay, it was confirmed that Pant has edged the ball with his bat and he survived.

Though Pant stayed in the crease, the four that went off his bat was denied as the rules were designed in such way. It is said that the ball becomes dead as soon as the on field umpire gives out, no matter what happens later irrespective of the final DRS result.

The confusing rule caused Pant and team India a valuable four runs which could make a big impact in the result of the game. Netizens who felt the same started slamming the umpire and ICC for designing such a rule.

Former South Africa’s performance analyst and qualified BCCI umpire Prasanna lara came up with a tweet writing “I have made this point earlier and even now.That horrendous LBW decision costed india 4 runs.Just can’t understand this rule Iam afraid. Why should you punish the team for a bad decision by the umpire ?” whereas many other fans fumed at the pathetic rule.

I have made this point earlier and even now.That horrendous LBW decision costed india 4 runs.Just can’t understand this rule Iam afraid.Why should you punish the team for a bad decision by the umpire ?

India/Rishabh Pant misses out four runs because of an umpire's mistake. ICC will wait until a team loses a World Cup final to correct the rule from the way it is right now.#INDvENG

@wwasay Pant didn't get four runs for that even though it came off the bat just because the on-field umpire ruled it out.

The ICC needs to really look into that. Imagine this happening in a WC final. So the batting team will lose the trophy for no fault of theirs? Ridiculous!

Stupid rule, for Umpire mistake loosing 4 runs, if it last ball 4 runs to get, loosing by rule for match.

Pant right now ! Should have given that four, you guys 🤣🤣🤣🤣 #INDvENG #JohnWick pic.twitter.com/EtRkgTRUNs

#ICC needs to look at this rule of not considering runs after reversing on-field Umpire decision, Rishabh pant had a four in his account on last ball of 40th over. Unfair!!#RishabhPant #INDvENG

Comment your views on the rules of ICC and the reactions of fans !!

As we all know, Sandy is one of the mischievous contestant in the Bigg Boss house. Being one of the very few contestants...