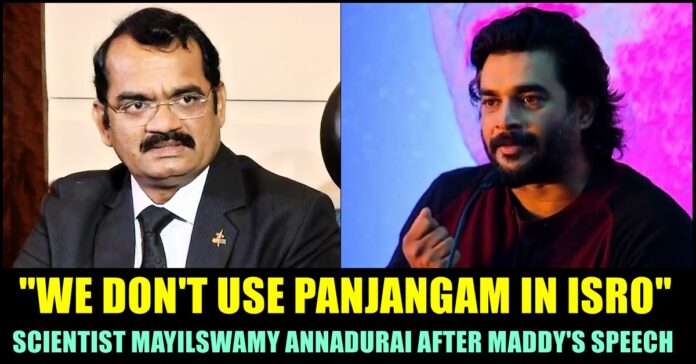 Mayilswamy Annadurai, famous Indian scientist who is known as Moon man of India, n an interview with Thanthi TV, has said that “Panjangam” won’t help in landing satellite in Mars planet as it was found 1000 years ago. The statement came from the scientist after actor Madhavan, in a press meet, has said that other countries lack what India has as far as rocket science is concerned and that is “Panjangam”.

“Almanac is something that is used across the world but experimenting a space travel with the use of to in Mars which was found 1000 years ago is impossible” said the ace Indian scientist. “We use a different Almanac which is changing time to time. The Almanac we use was created after several scientific research and computer stimulation” Mayilswamy Annadurai said in the recent interview he provided to Thanthi TV.

“Considering the places where planets are located, the moving of the planets, the place where we are in the earth, how the PSLV would travel, we would send the rocket. There is no use of Panjangam nowadays” Mayilswamy Annadurai said.

Earlier, Madhavan, popular Indian actor made a statement regarding the same as a result of which the topic about Panjangam is trending in the social media platforms. In the video which is doing rounds in social media platforms, Madhavan could be seen saying that the scientists at ISRO relied on the Panchangam (Hindu almanac) to launch the Mars mission precisely. In his long speech, Madhavan talked about the three engines that are used to launch the rocket and explained about how foreign countries lack what advantage we have through “Panchangam”.

Criticism for the speech of Maddy got stronger after Carnatic Singer TM Krishna shared the video, writing “Disappointed that @isro has not published this vital information on their website” and went on to translate the actor’s statement through his tweet. “R.Madhavan has officially become a whatsapp uncle from a chocolate boy” a twitter user wrote whereas Korah Abraham, a a journalist wrote “Such a disapointment to see the man, who was once a poster boy of Tamil romantic movies turn into a WhatsApp uncle”

Also Read : Maddy Got Trolled For His Statement About ISRO Using “Panjangam” !!