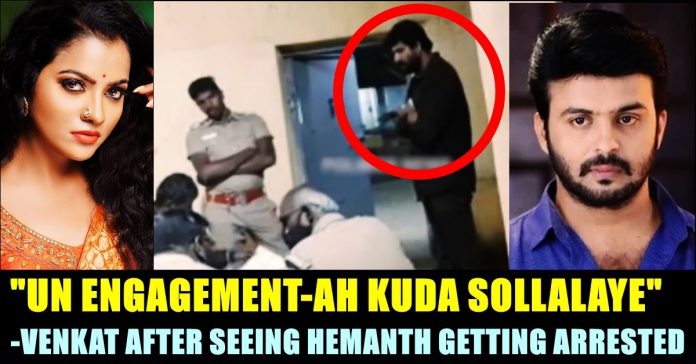 “Based on the outcome of the investigation carried out for the past few days, we have slapped section 306 of the Indian Penal code against Hemnath” said a Police official regarding the arrest of Chithra’s husband. He was arrested by the cops and was produced at the Poonamalle High court. He has now been lodged in Ponneri jail after being interrogated for six days. Chithra and Hemnath registered their marriage two months ago and were planning to have a traditional wedding on January.

It is notable that the family members of Chithra alleged a foul play and demanded an investigation in the case. Reports suggests that Hemnath did not like Chithra performing intimate scenes in her serials and the reality dance shows that she used to perform. They had a nasty argument regarding the same, according to reports. Earlier, it was reported that Hemnath dropped by the sets of Pandiyan stores and scolded her.

Chithra’s mother Vijaya firmly believed that her daughter would have never killed herself and demanded a fair probe. After the picture of her body surfaced, bruises were found in her face which made public to doubt the cause of her death. Reports suggested that an RDO enquiry has started as the actress had secretly married her fiance Hemnath kumar on October 19th by register marriage. The actress’s body was cremated on Thursday at the Besant Nagar crematorium in Chennai.

Now, on seeing this news of her husband getting arrested, Venkat Ranganathan, her co-star in “Pandiyan stores” uploaded a series of stories, expressing his emotions. He worried on the fact Chithra restrained herself from sharing about her personal to her friends in the sets of “pandiyan stores”. “It ends in this way. Sharing is caring but you never, You didn’t tell us about your engagement” said Venkat in his first story.

“Most of the media persons face this problem but” Venkat added a sad emoji in his next story.

“You could have walked out of that miserable life. There is no need to end your 28 years life” Venkat worried.

“Did we struggle to end like this ? We fought so hard to reach this stage in life. ain’t we ??” Venkat said in his next story.

Venkat, as soon as hearing about the demise of Chithra, uploaded a video in his Instagram account shedding tears.

Cyclone Nivar is expected to cross the coasts of Tamil nadu and Puducherry and make a landfall between Mamallapuram and Karaikal on November 25...

Prime minister Narendra Modi, while addressing the nation on the occasion of 145th birth anniversary of Sardar Vallabhai Patel, quoted a long poem of...

International Women's Day is being celebrated universally today. Celebrities from various industries, leaders, political personalities and many other important individuals wished women on this...