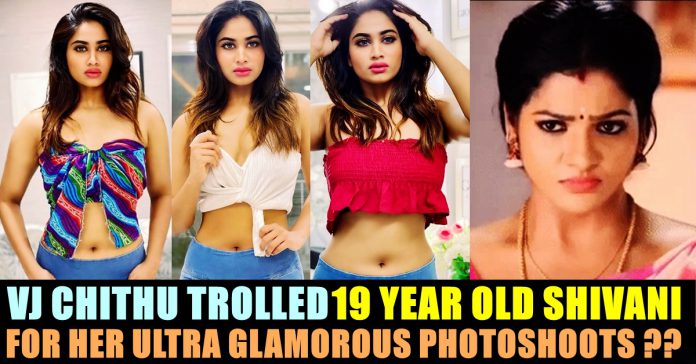 Chithu who s pretty much interactive with her followers in Instagram, recently uploaded her pictures from a recent photoshoot. The 25 year old beautiful actress who has been impressing TV audience with her performance as “Mullai”, looked elegant in the pictures she posted with her pretty golden colour lehenga. “Good morning, make positive thoughts and enjoy every moment of this day!” she wrote as a caption and wished her 12 lakh followers.

Good morning, make positive thoughts and enjoy every moment of this day!

Among the many of her followers who commented on her post, one of a follower said that he is expecting glamorous poses from her. “Expecting glamour poses😍” the fan wrote in the post of Chithu.

Replying to his comment, Chithu without losing her nerves, said that he can’t expect such pictures from her profile. Further, she took a sly dig at models who were born after the year 2000. Particularly who has a bio saying that they were born in 2000. “u can’t expect here may be who have bio as born in 2000” Chithu wrote in her comment.

On seeing this comment from Chithu, some of her followers predicted that the “Pandiyan Stores” actress is indirectly mocking Shivani who has been posting extremely glamorous pictures from her photo shoots.

In addition, Shivani, through her bio, informs that she was born in the year 2001.

Shivani has a separate set of followers for the posts she has been sharing in her official Instagram account. Known for appearing in serials such as Pagal Nilavu, Rettai Roja etc, 19 year old actress has a huge fan base in social media platforms and enjoying nearly 20 lakh followers in Instagram alone. Read : Netizens Couldn’t Believe This Transformation Of Actress Shivani !!

Mayanti Langer Shuts Down Random Twitter Users For Mocking Her Husband !! Check Out !!

Mayanti Langer, one of the most popular sports presenters in India, has often become a target for trolls on social media. Mayanti, who is...