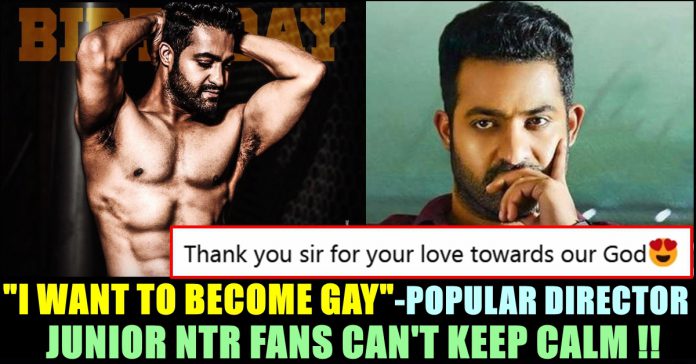 Ahead of his 37th birthday, a particular picture of Junior NTR boasting his well built six pack went extremely viral in the social media platforms. The Tollywood hero who enjoys a huge fan base among South Indian states, is known for his exceptional dancing skill and captivating screen presence. Hashtags such as #HappyBirthdayNTR #HappyBirthdayTarak are trending in the micro blogging social media site. Many of his power packed performances in his acting career which lasts nearly two decades, eventually credited him as the darling of masses.

Lloyd Stevens, Gym trainer of the “Temper” actor promised the fans of the actor that he will present them a surprise gift ahead of his birthday. As promised, he uploaded an unseen picture of Junior actor with a caption saying “Very happy to present this unseen image of Junior NTR.. I hope you all like it”

Very happy to present this unseen image of @tarak9999 .. I hope you all like it 😎

This picture went immensely viral among the fans and even few celebrities shared the picture with a caption pouring their love on the actor. The most unexpected tweet came from, controversial filmmaker Ram Gopal Varma who made significant movies across the country.

The filmmaker who is pretty much active in Twitter, enjoys 43 lakh followers in Twitter and is known for posting controversial tweets. On seeing the picture of Junior NTR, Ram said that he wants to become a gay, in a way of complimenting the actor’s physique.

“Hey Junior NTR, You very well know I am not a gay but I almost want to become one after seeing u in this pic ..Aaa body yentra nainaa” read his tweet which received more than forty thousand likes so far.

Hey @tarak9999 You very well know I am not a gay but I almost want to become one after seeing u in this pic ..Aaa body yentra nainaa😍🙏😍🙏😍🙏 pic.twitter.com/yOCIkOq4yv

This tweet garnered several kind of reactions as well. Enormous number of Junior fans celebrated the tweet of the “Satya” director. However, he happened face severe trolls from common twitter users as well.

Thank you sir for your love towards our God😍 https://t.co/SddsF93V2b