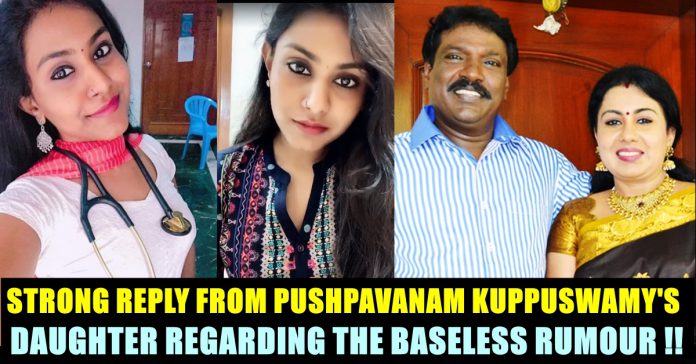 Since 15th December, a rumour regarding the “missing” of popular folk singers Pushpavanam Kuppuswamy and Anitha Kuppuswamy’s daughter did rounds all over the social media. Now Pallavi, one of the two daughters of the couple has released a clarification video to clear the air.

The rumour said that the eldest daughter of the couple had fight with her parents and with her younger sister. Several media portals also reported that she left the house in anger. The fake news also said that her cell phone was switched off which led the parents to file a complaint in the police station.

Now in a way of denying all these rumours, Pallavi, a doctor by profession has released a clarification video saying that she is fine. Before uploading the video, in her facebook account, she wrote “Guys some random fake news is spreading that I’ve been kidnapped or lost or something… I’m absolutely fine.. Do NOT believe such fake stuff!”

Followed by this status, In her facebook timeline, she uploaded a video in which we can see her interacting with the followers. “You all would have come across a news saying that I have been “missing” and my parents have filed a complaint regarding my “missing”. The news was completely fake and a baseless rumour. We are still searching for the source of the fake news to prevent it from happening in the future.” said Pallavi in the video.

“We have been receiving so many phone calls from various people since this fake news was out. I have been replying to maximum texts and phone calls. Now my phone got switched off. Now I am in my home and my father just arrived from out of station. They said that he filed complaint when he is not even in the town” said Pallavi who further said that she got deeply hurt by the fake news.

“As you can see I am in my home. Please don’t spread the fake news and I thank to those who inquired about my wellness” she added.

Pushpavanam Kuppusamy is a Tamil folk singer, lyricist, writer and music composer of Tamil folk art. He has been credited for reviving the Naatupura Paatu a Tamil folk art. Together with his wife Anitha Kuppusamy, he has conducted several music concerts of Tamil folk songs. Kuppuswamy is also an playback singer. The couple have together brought out several albums of authentic Tamil folk music. He has also written books on Tamil Folk songs.

The couple also collaborated together with Tamil film industry through some hit songs. They have sung for leading music directors of Kollywood such as Ilayaraja, Vidya Sagar, Yuvan Shankar raja, G.V Prakash, Devi Sri Prasad etc.

Previous article“They Said It Infront Of Me” Bharath Gets Emotional On Stage !!
Next articleGovernment Shuts Down Internet To Stop Protest ?? Use These Apps !!

“Stop This Stupid Obsession With How Much Each Actor Has Donated” This Kollywood Director Lashes Out On Public !!

The leading actors of Tamil film industry – Suriya, Vijay Sethupathi and Vishal – have contributed towards relief funds for those affected by Cyclone...

“Please Hack My Ex Girlfriend’s Instagram ID ?” Asked Many Users To The Hacker Who Hacked TRAI Chief’s Personal Data !! Here’s What He...

Accepting the challenge thrown by Trai chairman R S Sharma on Saturday, some ethical hackers have claimed to have cracked his bank account details...