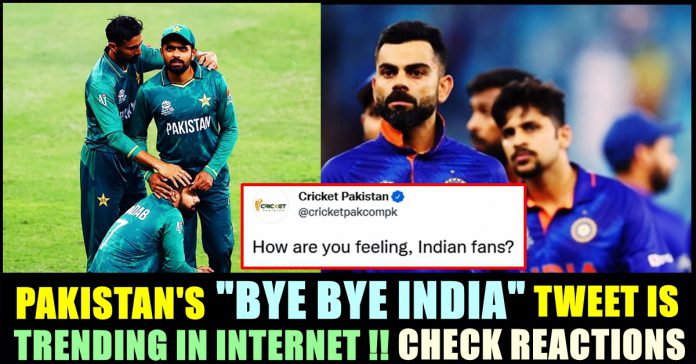 Tweets uploaded by the official twitter handle of team Pakistan after India lost their chance to qualify for the semi finals are resurfacing and trending in Internet after the Babar Azam led team lost to Australia and lost their chance to face New Zealand in the finals of the ongoing ICC T20 world cup tournament. Fans of team India caused twitter trending such as “Mauka Mauka” to troll the team which is considered as India’s rival for a long time and also brought back the tweets posted by Pakistan’s official twitter handle during the bad times of India in the tournament.

As soon as the match saw its result, fans of team India started digging the tweets of Pakistan to troll them back. On 7th of November, when team India got knocked out from the tournament, Pakistan twitter handle came up with a number of tweets, trolling team India. “How are you feeling, Indian fans?” read one of their tweets and through the another one, Pakistan team said “Bye Bye, India, See you next year!”

The tweets were posted when Afghanistan lost to New Zealand which caused India’s elimination. Check out the tweets below :

How are you feeling, Indian fans?#NZvAFG #T20WorldCup

Check out some of the reactions the tweets are trending now with :

Much better, thanks to Australia 😂.

Much better than you guys.. All thanks to Australia 😹😹#PAKVSAUS #T20WorldCup21 https://t.co/VxjRMljOjz

What goes around comes around #Karma
You are a verified twitter handle representing a quality cricket team. Learn to respect and earn respect in return…. See you next year ! #PAKVSAUS #T20WorldCup https://t.co/AqtkKbBE2H

Congratulations to Pakistan for qualifying to lahore Airport 🤣🤣🤣🤣🤣🤣🤣

BYE BYE Pakistan .How are you feeling , pak fans ?I think you got a taste of your own medicine😁proved that Karma is bitch. What goes around , comes around…If you are more happy for knock out of other team than sucess of your own team,Then whatelse someone can say #SemiFinals https://t.co/lUxVnqBhVS

On the special occasion of Suriya's 46th birthday, first look of one of his upcoming films "Jai Bhim" released and grabbed a top spot...

Remember The “Emotional” Movie Reviewer Of Telugu Films?? He Got Committed In A Movie!!

Lakshman Tekumudi who rose to fame through giving emotional interviews in theatre premises for Telugu movies, got committed to act in a movie and...