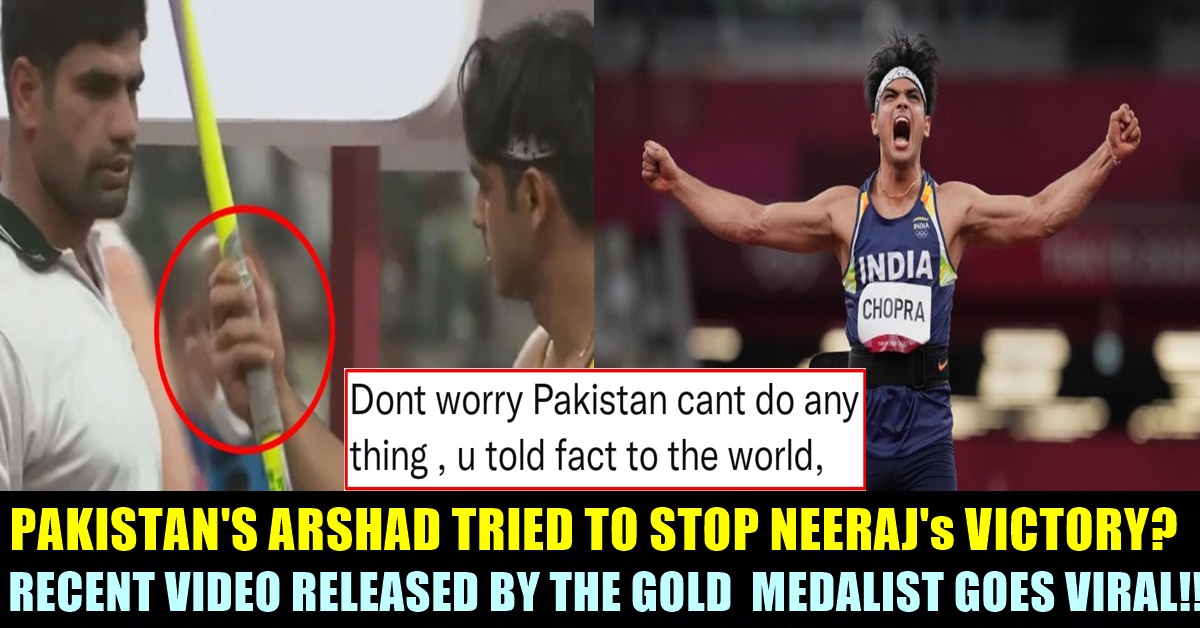 The Olympic gold medalist, Neeraj Chopra has kept a full stop to the controversies that were created due to his interviews. Many people have alleged Arshad Nadeem, who represented Pakistan in Tokyo Olympics as a villain. However, Neeraj Chopra has come out with a tweet on 26 August 2021 to stop people from maligning Arshad Nadeem.

The praise of Neeraj Chopra is sung even in the nook and corners of India. He has made every Indian proud by bagging a gold medal in the Tokyo Olympics 2021. He has become the first Indian to win a gold medal for athletics in Olympics. Following this, he is ranked second in the World’s Athletics Ranking with a score of 1315. He stands next to Johannes Vetter of Germany, whose score is 1396. In the men’s javelin throw final of the Tokyo Olympics 2021, his throw reached 87.58m. His astounding performance gained him a great reception among the Indians. Even after a great achievement, Neeraj Chopra has humbly replied that he “Can’t let success go to my head”. This reply of his has created an impression that he is wishing to achieve greater heights representing India.

“I was searching for my javelin at the start of the final (in Olympics). I was not able to find it. Suddenly I saw Arshad Nadeem was moving around with my javelin. Then I told him ‘Bhai give this javelin to me. It is my javelin. I have to throw with it’. That is why you must have seen I took my first throw hurriedly.”

This has been cooked up in different ways and finally, Nadeem is portrayed in a negative shade. Neeraj Chopra has released a tweet showing his disappointment. In the tweet, he has requested people to stop using his comments for their vested interests and propaganda. He has ended the tweet coneying that sports teach unity and that some of the reactions from the public have disappointed him. He has also said that anyone can use anyone’s javelin, and it’s a simple thing. Moreover, he says it’s considered to be a rule that any javelin can be used.

I would request everyone to please not use me and my comments as a medium to further your vested interests and propaganda.
Sports teaches us to be together and united. I'm extremely disappointed to see some of the reactions from the public on my recent comments.

While many people appreciated Neeraj Chopra’s effort to stop these controversies and the hatred being spread against Arshad Nadeem, few people on Twitter, have taken a different stand on this.

Dont worry Pakistan cant do any thing , u told fact to the world, otherwise world is thinking u got medal with the help of porkis, we understood now because of Arshad Nadeem u missed world record.. With Shiva blessing u got Gold ..u made us proud

What would you have done if you had LOST the Olympics bec of the last minute stress?

People reacted bec they care for you neeraj, like one cares for their family member. Don't insult common people saying they have vested interests in supporting you. https://t.co/NXdFHrbI6e

Hey kid people reacted as they cared for you.

Don't fly so high remember the fall will be greater & harder

So you are angry for those who shown concern and support for you after your own comment? You should be clear on this when you commented partially. You never utter the game rule at that time and you just told your javelin was in nadeem hand. What you expect other to understand?

I would humbly request you to STOP worrying about how media interprets your statements and creates narratives. There are enough folks out there to slug it out. That's not your job and you may be wrong too.

For a sportsperson, silence & focus is golden.

Value it. Practise it.

As for being disappointed , what does that say about you ?

Haven't you been seeing what destruction of our social fabric has been taking place since 2014 , led by the top ?

It’s was a stupid and unnecessary comment to begin with. In cricket games, we have seen countless times opposite team members pick up and feel the batters bat just to get a feel of it. You got the gold medal but now you need to learn to behave like a medalist too.

“I Never Said This”- Elon Musk Destroyed His Own Motivational Quote In Seconds
Woman Started Dancing To Express Her Anger At Chethpet Railway Station !! WATCH