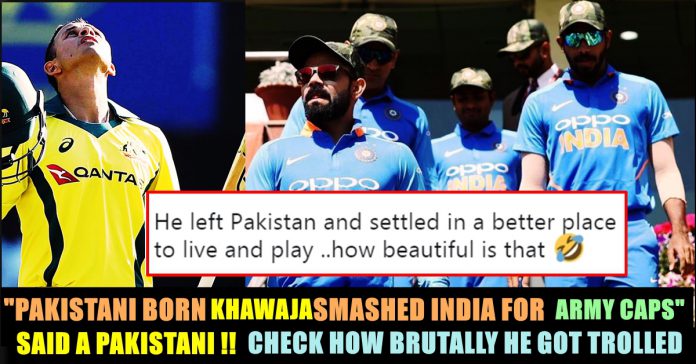 In a remarkable gesture, the Indian cricket team wore camouflaged army caps in the third One-Day International against Australia to pay tribute to the CRPF jawans who died in Pulwama terror attack two weeks back and the armed forces.

MS Dhoni, himself a Lt. Col. with the Territorial Army, presented the caps to each member of the team and management ahead of the ODI at his home ground of Ranchi. It was also announced that the Indian cricket team will wear camouflaged caps to pay tribute to the Indian Armed Forces at least once every year.

Virat Kohli, the Indian captain, also said at the toss that the whole of the team will donate their match fees of the game to the National Defence Fund and further urged everyone in the nation to help the families of the army in every way that they can. Unfortunately team India lost the match by 32 runs despite Kohli’s magnificent century. In Australian side, Skipper Aaron Finch and Usman Khawaja added 193 for the opening wicket and only a spirited bowling performance from India kept Australia to 313 off their 50 overs. Finch was unlucky to fall for 93 but Khawaja went on to score his maiden ODI hundred. It was the maiden  hundred from the  Pakistan-born cricketer in  a match which saw  Indian cricketers being criticized for wearing  army caps. Many Pakistani social media users mocked Indian players for wearing Army caps and also trended Usman Khawaja’s name in twitter.

On of a Pakistani Internet user named Ahsan in his account wrote “So Indian Cricket team is wearing Special caps to support their Army and a Pakistani Born Usman Khawaja smahsed a Century against them. How beautiful 😂😂😂”

So Indian Cricket team is wearing Special caps to support their Army and a Pakistani Born Usman Khawaja smahsed a Century against them. How beautiful 😂😂😂 pic.twitter.com/emKVeXa0r5

This tweet of him received fitting replies and hilarious trolls as Khawaja decided not to play for his own country but playing for some other country.

Check out some the reactions here :

Maybe he’s trying to send the message “Drop hundreds, not bombs!”. But you dumbwits won’t get that, would u?

He forced a draw against his fellow Pakistanis in UAE a few months ago…that was indeed beautiful.

When was the last time pak played an international cricket series in pak?

Not as beautiful as being able to host games in the home country:). Sadly not all countries can feel this 😉

Usman is smart enough, that’s why he is playing for Australia not Pakistan. #pkmkb

How beautiful is this?? pic.twitter.com/90mkcW00CV

Usman Khawaja decided to live in and play for a better country.
How beautiful is that?

It would be fun to watch when he’ll play against pakistan and score runs. And i can imagine how y’all will moan about him.

Well he made the right choice between throwing a cricket ball and throwing grenades. How beautiful is that.!

You love cheap thrills don’t you..so typical of you guys!!!that player is an Ozzie passport holder…so stop revelling in his glory and now u may take a bow

Previous articlePaksitan Wants ICC To Take Action Against Indian Team Players For This Reason !!
Next articleVJ Anjana Said That She Switching From Sun Tv To Zee Tamil !! Check Out The Reactions !!

Kajal Aggarwal Receiving Hatred From A Set Of Fans For This Reason !! Check Out !!

The Election Commission has stopped the release of "PM Narendra Modi", a biopic on the Prime Minister, till the end of national elections on...

Relationships through social media platforms became common nowadays. Infact, youths  are considering it as an outdated technique to get into a relationship. Social media has...