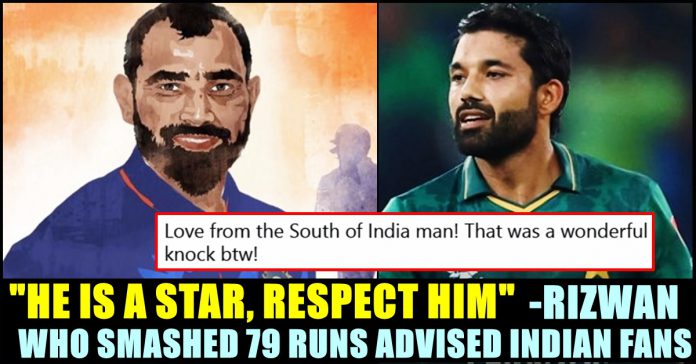 Pakistan opener Mohammed Rizwan who smashed 79 runs from 55 balls and helped his team to beat India in the first face off of T20 world cup 2021, reacted to the hatred spewed on Mohammed Shami, India bowler who is receiving support from all over the country after being subjected to online abuse due to his bowling performance. The Pakistan opener said that Shami is a star and one of the best bowlers in the world. He also requested people to use the game cricket to get united and not to divide.

After India lost the match against Pakistan, Indian pacer Mohammed Shami has been facing the wrath of cricket fans who belong to north part of the country. His Instagram posts are being flooded with negative comments based on his religion. The cricketer conceded 43 runs in the 3.5 overs he bowled which helped team Pakistan to break the streak of 12-0 against India in world cup tournaments. Former and current Indian players including Sachin Tendulkar and Virender Sehwag came in to support the pace bowler. Even Politicians joined the cricket fraternity to condemn the targeting of religious identity by social media trolls.

These are some of the comments on Mohammed Shami’s Instagram account. The hyper-nationalist Indian cricket fans have unleashed worst form of communal abuse on Shami for India’s loss against Pakistan. Not surprised at all because this is what India is famous for. #IndvsPak pic.twitter.com/KCsSzAr5y3

Shaheen Afridi picked three main wickets of India which includes Rohit Sharma, Virat Kohli and KL Rahul. Pakistan openers Mohammed Rizwan and Babar Azam effortlessly chased the score down with 11 balls spare. Pakistan won India without losing a single wicket and broke the streak of 12-0 and made it as 12-1 as far as the world cup face offs of both the teams are concerned. Read : From Sachin Tendulkar To Rahul Gandhi, Entire Country Comes In To Support “Shami” After The Loss !!

Followed by Sachin, Sehwag and several other Indian cricketers and politicians, Mohammed Rizwan, the Pakistan player himself came up with a tweet advising people of India. Rizwan said that a kind of pressure, sacrifices and struggles a player go through for his country and its people is immeasurable. “Mohammed Shami is a star & indeed of the best bowlers in the world. Please respect your stars. This game should bring people together & not divide ’em” Rizwan said in his tweet.

The kind of pressure, struggles & sacrifices a player has to go through for his country & his people is immeasurable. @MdShami11 is a star & indeed of the best bowlers in the world

Please respect your stars. This game should bring people together & not divide ’em #Shami #PAKvIND pic.twitter.com/3p70Ia8zxf

This tweet from him garnered huge number of positive response from the cricket fans of both the countries. Check out some of their reactions below :

Love from the South of India man! That was a wonderful knock btw!

That smile when u hugged Virat ❤️
U earned a huge respect from me champ ❤️ pic.twitter.com/k3sowo3KUI

🇵🇰 Mohammad Rizwan not only winning the hearts on the field but off the field aswell – and that too from across the border now. 👏👏

Rizwan is now one of my favourites… respect!

Rizwan, you are first player from pakistan of whom I have become a huge fan. I saw you play only once and that too in indvspak match. Your attitude while playing game and after winning game just won my heart. You keep things simple. Hope I get a chance to meet you someday.

The storm has claimed at least 45 lives and severely affected the districts of Thanjaur, Tiruvarur, Dindigul and Pudukkottai. As many as 45 deaths have...

Director Shankar who is known for making some of the significant films in Tamil cinema history has been subjected to non bailable warrant by...