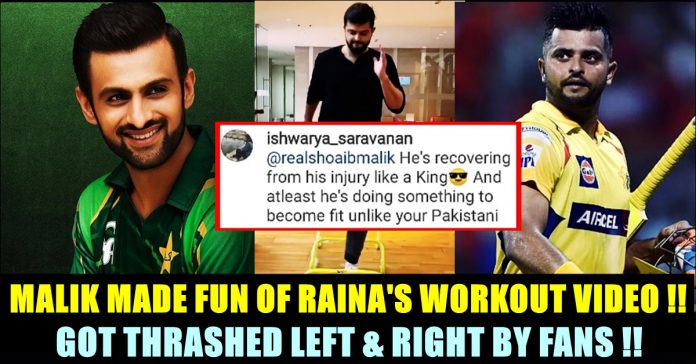 Suresh Raina played for Indian team, a very long time ago. Being a left hand middle order batsman, Raina enjoys a massive fan following in India despite of his absence in the national team. Fondly called as “Chinna Thala” by Tamilnadu fans, Raina represents Chennai Super Kings in Indian Premier League and even captained the team occasionally. Apart from his aggressive batting, Raina is known for his terrific fielding efforts and considered as one of the best fielders in the world till date.

The cricketer recently underwent a knee surgery in Amsterdam, the Netherlands which is keeping him out for most of India’s domestic and International matches. The 32-year-old batsman has been going through pain in his knee since the last few months and decided to undergo surgery. The knee surgery was successful and the cricketer started hitting Gym since few days back.

Being one of the many cricketers who are very much active in social media platforms, Suresh Raina never missed to let his follower know about his daily routines, especially about the his Gym sessions. Recently, he posted a video of himself training in Gym. The cricketer struggled a bit to do the workout as he was in his rehabilitation session.

Many of his 90 lakh followers encouraged the cricketer for his attempt on seeing his post of Raina. They also wished him to make a come back in the national side soon. However, Pakistan player Shoaib Malik who seems to be unaware of Suresh Raina’s surgery trolled him. Malik said that Raina is making it look harder than it is. His comment said “Dude you are making this look harder than it is 😅😅😅” and received more than 700 likes so far.

This comment of the Pakistani cricketer irked the fans and followers of Suresh Raina who started trolling back Malik by mocking the quality of Pakistan cricket team and their English communicating skills.

Having represented the Men in Blue in 226 ODIs, 78 T20Is and 18 Tests, Raina has been a brilliant servant of Indian cricket. He last represented India in July 2018 in an ODI against England at the Leeds but the swashbuckling left-handed batter has been trying hard to make a comeback to the Indian team.

Shoaib Malik, being a former captain of Pakistan team, announced his retirement from One Day International cricket on July 5 this year after Pakistan won their last group stage game against Bangladesh at Lord’s at the 2019 Cricket World Cup.

What do you think on this comment of Malik and the reactions to it ?? Comment your views below !!