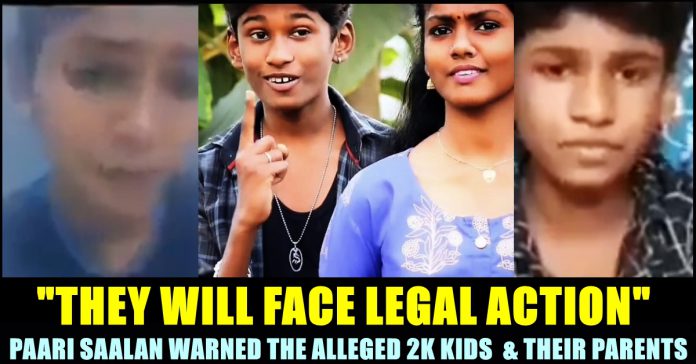 Popular social media influencer Paari Saalan condemned the parents of the viral couple for letting their children involve in a romantic relationship prior they become major. He said that the parents of the chilldren could face legal actions for making revenue by using their kids. Paari said that these viral videos might harm the future of the kids and their education. He said that a law should be implemented to term the romantic relationships of kids under 18 as “illegal”.

For past few days, a number of videos of an alleged couple who are believed to be kids under 18, are going viral in social media platforms. One of the videos shows a boy feeling upset and getting consoled by his mother and a girl. It is said that the Instagram account of the boy got hacked and his mother could be heard calling the girl as “Marumagale” (Daughter-in-law). The girl calls his mother back as “Aththa” (Mother-in-law).

As soon as the video went viral in social media platforms, other older videos of the duo started flooding in the feeds in which they could be seen recreating the romantic songs of Tamil cinema. Several, memes, trolls, jokes and criticism were made targeting the duo.

Paari firmly believed that these kind of videos could spoil the future of other kids. “This is a period for them to get educated. Making these kind of videos won’t take them anywhere. Instead, they will be trending in social media for few days and people will forget them sooner. “Parents of the kids must apology and will face legal action if they fail to do so” he said in the video.

9 Things We Should Teach Boy Kids Before Restricting Girl Kids In Order To Make India A Safe Place !!

Raising kids is no easy job because how you parent entirely determines the kind of person your child will grow up to be. How...

Padmapriya Of DMK Got Trolled For Her “Green Diwali” Campaign !!