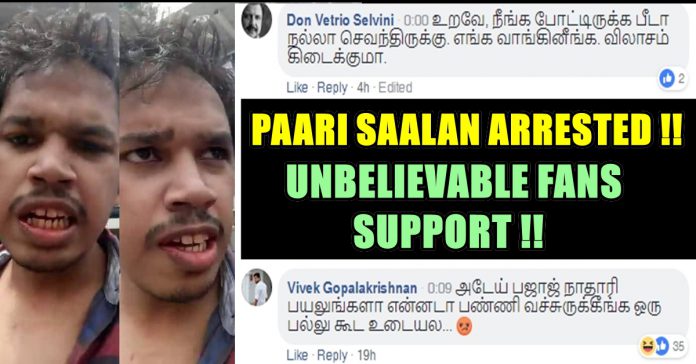 Paari Saalan , a social media influencer who is prominently known for his controversial speeches in most of the leading Youtube Channels. He will always be seen talking about the existence of Illuminati , the secret society which is believed by him as it is ruling the world. Yesterday, a selfie video of him went viral on Internet in which he is standing infront of Bajaj showroom with blood shedding from his mouth.

Fierce Paari salan is seen accusing the Bajaj show room for being Telugu speaking people. He also says that there has been a fight between him and the showroom men. As he went there to receive his bike which he left earlier for service , he allegedly says that they have attacked him and he also does not give much details about it further.

Mentioning their belongings he also says “It is you Tamil People have to decide what to do”. Later he released another video saying that they are not “Telugu People” but they belong to marwadi jain baniya community people.

Now news surfaced from You turn that Paari salan has been arrested by Velur Police for tampering the  Bajaj showroom. The arrest has been made after Showroom staffs lodged a complaint to the district police of Velur.

For instigating diversity for his personal problem he has been vastly trolled by social media people. Instead detailing the issue he always mentioning the community for which Social media users showed disappointment through their negative comments. Here’s some of the people’s reaction :

Previous articleBREAKING : Narendra Modi To Be Arrested By CBI In A Shootout Case !! : SHOCKING !!
Next article7 Important Things We Bet You Missed To Note While Watching “Kaala” : Hidden Politics !!