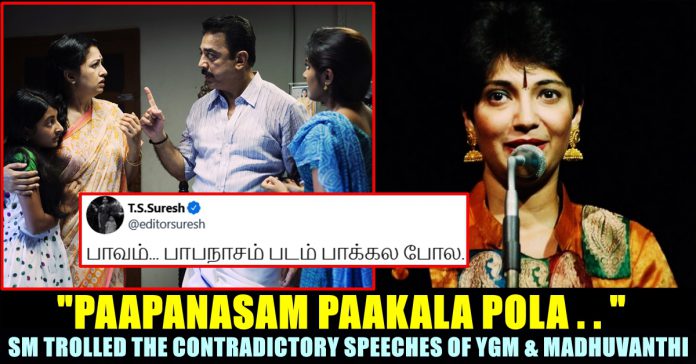 Ever since Madhuvanthi released a video reacting to the harassment case that emerged against a faculty of PSBB school, she became a subject to the online trolls and criticisms. Users of the social media platforms has been bringing the oldest speeches of Madhuvanthi and YG Mahendra to troll and make fun of. Now, a number of social media users has been sharing a video of the contradictory speeches of Madhuvanthi and Y.G Mahendra about how the management of Don Bosco school handled a situation that involved the latter.

Y. G Mahendra who completed his schooling in the Don Bosco Egmore, in a public event, said that he never had this feeling of Don Bosco being a Christian institution. “Hats off to Don Bosco. We never felt that we were in a Christian missionary. Perhaps, the most secular institution in India is Don Bosco Egmore where we studied.” said Y.G Mahendran and went on to share about how a mischievous prank he committed was handled by the school management.

“Some of the people in the school had gone and told Mallon that we had done it as an offend to religion. Two stalwarts stood by us , I can never forget them. Mr. Rama chandran and Mr. Selva Durai. They went to father Mallon and said that we are just 11 and 12. They said that what we did as a childish prank. They said that we just wanted to be a Hero among the others. Immediately, father Mallon was convinced.” YGM sain in the event.

“He called as and said that it all forgotten and asked us to go back to class. That was never held against us a black mark till matric. That could happen only in a school like Don Bosco. In anyother school, would would have received a black mark, we would have been noted, our marks would have been reduced. It never happened in Don Bosco.” YGM could be seen saying.

The contradictory statements between the duo has garnered the attention of social media which is evident through the trolls that are surfacing in it. Film editor Suresh shared the video in his twitter timeline and said “They didn’t watch “Paapanasam” it seems” in his tweet to denote that they didn’t have the coordination like the “Paapanasam” family before uttering a lie.

Check out some of the reactions eblow :

Rashomon effect. Except one is an eye witness and the other is bigoted lying rabble rouser. https://t.co/CRvPwFAVOe

Yesteryear actress Rekha who recently grabbed the attention of TV audience through the reality cookery show "Cooku With Comali" has revealed about a fact...