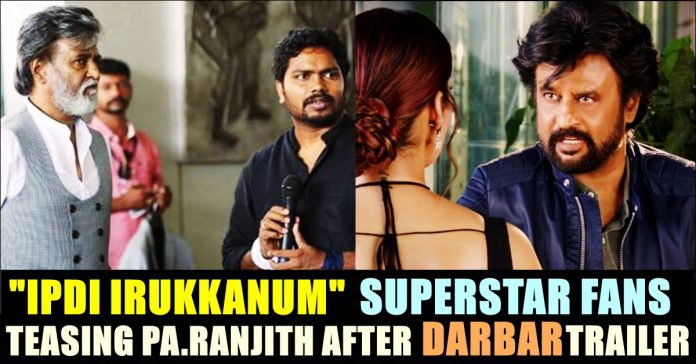 Darbar trailer hit 6 million views within 12 hours of its release time. Superstar who was last seen in Karthick Subbaraj’s “Petta”, is next to be seen in A.R Murugadoss’s directorial. The film which is planned to release on Pongal, has Lady Superstar Nayanthara in the female lead. The makers of the movie released its trailer yesterday and it is going viral across the internet.

The film, which is titled Darbar, appears to be a cop drama of sorts. In the first look poster, Rajinikanth’s elated picture takes the centrestage as insignia from a cop’s uniform including a belt and a shoulder badge surround him. Now the trailer shows Rajinikanth as a Mumbai based cop who stands against a vicious villain Suniel Shetty.

The trailer shows Rajinikanth as a merciless cop who kills everyone in no time. Dialogues such as “Idhu Epdi Irukuu” from his calssic movie were also took place in the trailer which elevates its standard with the presence of Nayanthara.

As soon as the trailer released, it impressed many fans across the world and few celebrities couldn’t keep calm and let their emotion out by posting about it in their social media accounts. Director Pa. Ranjith who directed Rajinikanth in 2 movies back to back wrote “🎉🎉🎉 Woww #Superstar 🎉🎉🎉” while seeing trailer.

Pa.Ranjith directed Rajinikanth in Kabali and Kaala back to back. Both the movies got acclaimed critically and attracted few fans of the Superstar. However, it didn’t impress few of the fans who expected mass elements in the film. Most of the above mentioned fans were seen in the comment section of Ranjith’s post of appreciating Darbar trailer. “You’ve just wasted your opportunity with Rajini sir not once but TWICE, this is how Superstar should be shown not as in Kabali, a big let down after a huge excitement of Kabali teaser”

You've just wasted your opportunity with Rajini sir not once but TWICE, this is how Superstar should be shown not as in Kabali, a big let down after a huge excitement of Kabali teaser

U spoiled his mass with two of ur shit movies…

As far as Darbar is concerned, Rajinikanth played the role of a cop in 1992 released Pandian. Darbar, slated for Pongal 2020 release, will the first of the most-anticipated films of the year. The background score and soundtrack was composed by Anirudh Ravichander, while cinematography and editing were handled by Santhosh Sivan and Sreekar Prasad, respectively.

What do you think on these reactions received by Pa.Ranjith ?? Comment your views below !!

A 27-year-old youth living in Kuwait was arrested by Tamil Nadu police upon his return for appearing in a video on social media where...

“Please Hack My Ex Girlfriend’s Instagram ID ?” Asked Many Users To The Hacker Who Hacked TRAI Chief’s Personal Data !! Here’s What He...

Accepting the challenge thrown by Trai chairman R S Sharma on Saturday, some ethical hackers have claimed to have cracked his bank account details...