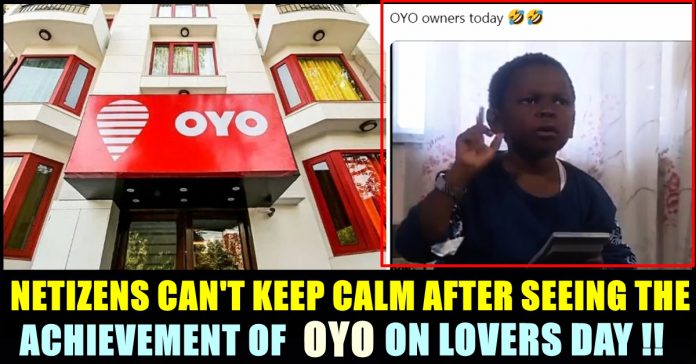 Lovers across the world will be celebrating Valentine’s day today. Many business franchises are looking for ways to make use of this special day to move their business one step forward. Many products including Durex condoms are promoting their products on this special day of Valentines. Meme makers are no exception as they are also making memes out of the lovers day concept to sell their meme.

Now to our surprise, a recent report has suggested that the popular Oyo rooms faced a vast amount of increase in the bookings of rooms for this year’s Valentine’s day. Oyo Rooms, also known as Oyo Homes & Hotels, is an Indian hotel chain. It is the world’s third-largest and fastest-growing hospitality chain of leased and franchised hotels, homes and living spaces.

Chief operating officer of OYO Gaurav Ajmera said “We have received a whopping 90.57 % of increase in Valentine’s day bookings. According to out internal data sights, couples account for the maximum share of bookings on 14th february followed by families and group of friends celebrating this long weekend, followed by solo bookings” according to Business insider.

OYO’s Valentine’s day booking chart was topped by Delhi as usual whereas Kolkata, Bangalore and Mumbai grabbed the next spots, according to Gaurav who went to reveal a fun fact about a guest who booked for a stay on Valentine’s day as early as 24th of August on 2019.

OYO became a couple friendly room booking app since 2016 during when they implemented a “relationship mode” on their app which allowed unmarried couple to book room unlike other hotels in India. Since then, it became couple’s favourite on Valentine’s day season of every year.

Netizens who are not committed in relationships are very much aware of these offers and started making memes and jokes out of it. Check out some of the memes that stormed into the internet regarding this offer of OYO on Valentine’s day :

*me wen my friend is narrating his Oyo room story* pic.twitter.com/sN8X8eFORl

When you got a new job in OYO and see your crush with someone else. pic.twitter.com/lqIjxG49Sk

That one friend who has booked #OYO to celebrate Valentine’s Day right now 👇🏽😂 pic.twitter.com/Bzc6KRHzaF

When her boyfriend doesn’t gift her chocolate on chocolate day, teddy on teddy day, rose on rose day but book #OYO room on valentine’s day.
She: pic.twitter.com/r958f6PxAw

Comment your views on OYO making history and Netizens reactions for it !!

The most awaited trailer of actor Vijay's "Beast" released in YouTube on Saturday evening 6 PM. Fans of the actor can't keep calm after...

While players from foreign countries are leaving to the home town amidst the worsening state of COVID 19 spread in country India, Australian pacer...

Prithi Narayanan, wife of renowned Indian cricketer Ravichandran Ashwin shared a series of Instagram Stories in her handle from a page which explains about...