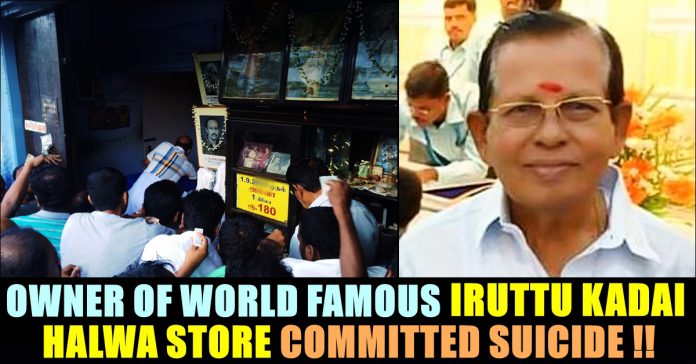 The 80 year old, tested positive for coronavirus recently and decided to end his life himself. After developing a severe fever, Hari Singh was admitted to a private hospital in Palayamkottai. When the doctors conducted a COVID 19 test, the result came positive, says reports. Two more people associated with the shop tested positive and has been admitted to the same hospital.

As it was being discussed whether to shift hari Singh to a COVID 19 special facility, he was found dead. Reports suggests that he was seen depressed after seeing his COVID 19 result. The decision made by the owner of Iruttu Kadai Halwa shop shocked the entire state as there are enormous number of people are aware of his shop’s delicious Halwa. Iruttu Kadai is a very famous store across the state, which opens only for three hours from 5PM to 8 PM to distribute the halwa.

“Based on the initial reports, it seems like a death by suicide. We have received information that he was tested positive for COVID 19 and was admitted in a private hospital for treatment. He was found dead at the hospital itself. Further investigation is underway” said Deepak M Damor IPS, Commissioner of Police, Tirunelveli city.

Though, Doctors and government authorities are asking people not to panic if they tested Positive for COVID 19 as it is treatable, people with weak heart and depressed mindstate are taking such extreme steps. Tirunelveli is a district with 680 positive COVID 19 cases and was one among the earliest hotspots for COVID 19 in the state.

Known for its legacy, the family of Hari Singh are making this authentic halwa sweet for generations. The name “Iruttu kadai” was kept due to the shop’s dark outer look. the shop is located quite close to the Nellaiappar temple in Tirunelveli. The popular sweet is made using a laborious process with three simple ingredients, wheat sugar and Ghee.

Let us pray for Hari singh’s soul to rest in peace !!