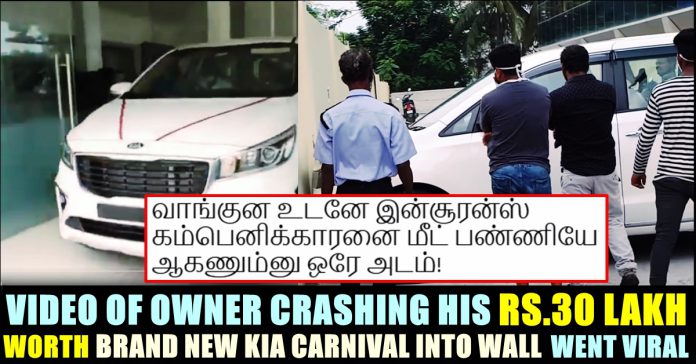 It is a dream for every one of us to buy a car on our own at least once in our lifetime. Those who have achieved it could tell their experience to us on how they felt while buying their new car from a showroom. One such Indian citizen who bought a brand new Kia Carnival, crashed his car into a wall during the process of buying it from the dealership.

The video which is doing rounds in social media platforms for past two days, shows a showroom employee explaining the basic instructions to operate the vehicle to the owner while the latter is at the wheel. After hearing about the basic functionality of the vehicle, the owner who could have bought the car by paying money between Rs. 24.95 lakh and Rs. 33. 95 lakh, stepped on the acceleration only to crash the car into the wall.

The video also shows that the impact was hard enough for the airbags to deploy. Fortunately, no one was injured and no damage for any other vehicle nearby occurred during the accident, including to a motorcycle that was parked nearby. The showroom was quick to react and dispatched the damaged Kia Carnival to the dealership owned workshop for the repairs. Needless to say, the broken Kia carnival will have to spend several days at the work shop before it can become road worthy again and it would take the driver quite sometime to come to terms with what happened.

The brand new car’s bonnet, the bumper, and the side panels have taken maximum damage. In addition, coolant or water from the wipe water reservoir appears to have leaked. Other parts in the inside are also damaged it seems which needs to be repaired.

It is highly believed that the owner who bought the Kia Carnival, has never driven an automatic. The first thing one usually does is hit the brakes while driving an automatic transmission. People who isn’t used to it would look for clutch. That’s what happened in this unfortunate occasion it seems.

As soon as, the video got uploaded in BMC HD videos uploaded, it went viral across the social media platforms with various kind of reactions. Check out some of them below :

Whats happening earlier it was the VW Polo that crashed right after delivery, now this beautiful Kia Carnival smashes into the wall before delivery ? Guess the 100 day lockdown effect, people have forgotten how to drive ? pic.twitter.com/tq2K4MWicF

Lolol this happened to me one Sunday when I went to the Def Col HDFC ATM. Parked my car but forgot to put the hand break on. The car started moving and I tried to run behind it and it finally stopped after hitting the wall across the road. 😆 pic.twitter.com/GxKeTSkxr7

The excitement of experiencing taking delivery of a new car is understandable but one should be aware of the situation and technical aspects as well. A week before, a similar incident took place as owner bumped his brand new car into a pillar as soon as taking the delivery. CCTV footage of the same went viral in social media platforms as well.

With just one week to go for the Tamil nadu assembly elections, opinion polls from various media portals are surfacing in Internet. Followed by...

The Indian team is currently playing the first of the five-match Test series against England at Edgbaston in Birmingham. After shambolic outings in the...