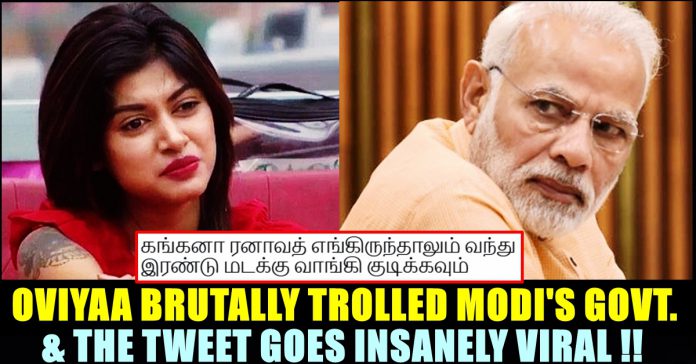 Actress Oviyaa conducted a chat session with her followers after a long time. Among the many replies she gave to her fans regarding her Bigg Boss stint, COVID situation, handling negativity, a reply she gave to a follower who asked about the Modi government is going viral among the users of the micro blogging social media site.

After a very long time, Oviyaa logged in to twitter to interact with her fans and followers. She who enjoys 5 lakh followers in Twitter, answered to enormous number of questions of her fans during the chat session which lasted nearly two hours. Some of her interesting answers are going to make headlines soon and let’s have a quick look at them.

A follower asked her to tell one word about the current government ruled by prime minister Narendra Modi. Replying to him, the actress uploaded a meme template of herself which says “Enna Panrathu sir, ellam sirippa iruku” (What we could do, everything that are happening makes me laugh) The actress said it to Bigg boss host Kamal Haasan during the first season.

This reply from her garnered the highest number of likes comparing to her other answers. Check out some of the other answers Oviyaa provided to her fans :

Hi I think I’m just lucky enough to experience all that ! We are all successful if we don’t compare ourselves with anyone ..The real success is peace of mind !

In the show, the actress attracted the audience through her bold statements and gutsy decisions inside the house. The actress confronted with almost all of her housemates inside the Bigg Boss house, including experienced dance choreographer Gayathri Raghuram and senior comedian Ganja Karuppu. However the actress couldn’t make use of the fame she gained through Bigg Boss show as her movies after that show didn’t go well. But the fan base of the actress stayed the same and she continued to speak her heart out in public, especially in social media platforms.