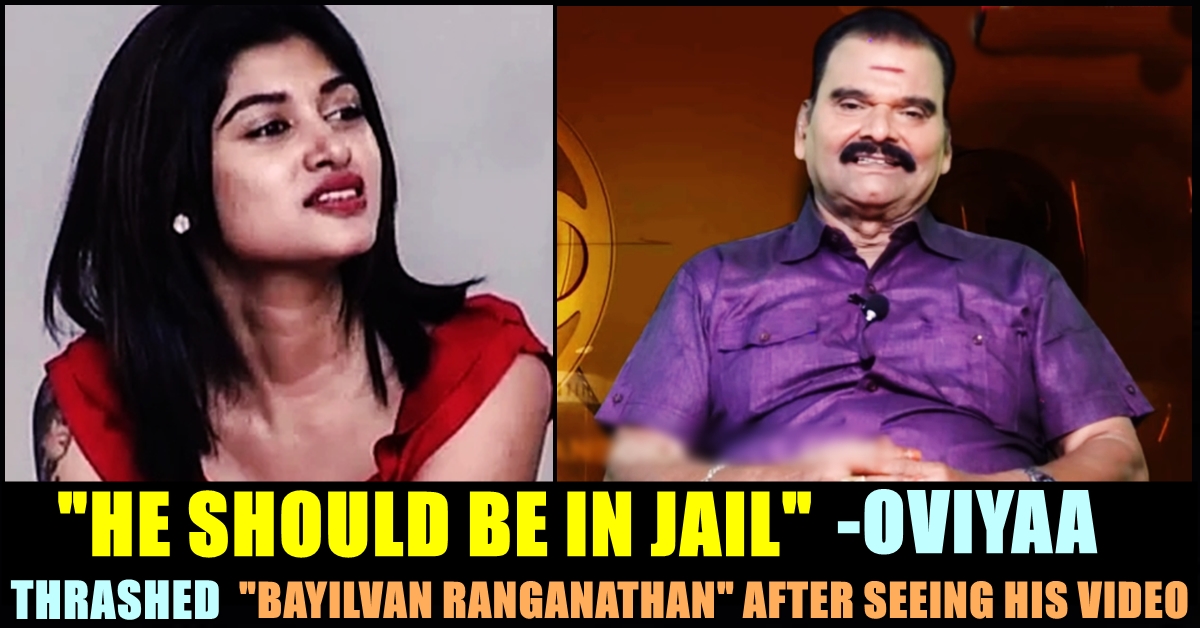 South Indian actress Oviyaa slammed controversial journalist “Bayilvan” Ranganathan after seeing one of the videos he uploaded in his you tube channel. In the 11 minute long video, title of which read “Torture Seithadhaal Cinema-vai vittu odiya nadigaigal” (Heroines who ran way from industry after getting tortured), Ranganathan could be seen listing out a number of heroines and he talked about why they left cinema. Majority portion of his video contained himself body shaming heroines and making fake allegations against them to garner viewership. He also named Oviyaa and made a false allegation against her which led the actress to slam him through her official twitter handle.

In the show, the actress attracted the audience through her bold statements and gutsy decisions inside the house. The actress confronted with almost all of her housemates inside the Bigg Boss house, including experienced dance choreographer Gayathri Raghuram and Ganja Karuppu. As she has become a favorite contestant among the audience in Bigg Boss season 1, ‘Oviya’s army’ and ‘Oviyans’ have gone crazy on her. A campaign has been launched on the social media platform at that time to garner votes for the much-loved contestant who has managed to charm viewers with her expressions and way of dealing with the others in the house.

Now, while talking about her in his video, Ranganathan said that he remembers of her hair style while uttering her name with a chuckle. “I don’t know whether she is an innocent or a rebel. She gave open statements about her alcohol habit and about her relationships. She has stayed almost in all the hotels of Mahabalipuram” said Ranganathan and accused her of involving in “adjustments” more than acting in films.

“Despite of having acting talent, Oviya lost her market due to her interest in gaining income through “other” ways.” Ranganathan said in his video. Watch the video below :

On seeing the video, the actress shared it and said “This is what non sexual women harassment!#WomensRights !” in her tweet. Check out her tweet below :

“This man has been like this forever. Still gets hired because of the audience that are like him” replied Singer and MeToo activist Chinmayi and Oviyaa replied to her saying “So pathetic!”

To a fan who said that the journalist should be in jail, Oviya expressed her agreement.

Throughout the video, Ranganathan talked ill about heroines Sadha, Sandhiya, Pooja, Abhirami, Manthra, Sherin, Sunainaa, Sonia Aggarwal. Despite of few comments which confronted him, the video garnered huge reception with 5k likes which shows the mindset of his followers. It is high time for public to call him out instead of encouraging his regressive videos.

Internet Thrashed “Dikkilona” for This One Dialogue!!
Chief Minister M K Stalin Getting Severely Criticized After The Demise of Soundharya, A NEET Aspirant!!