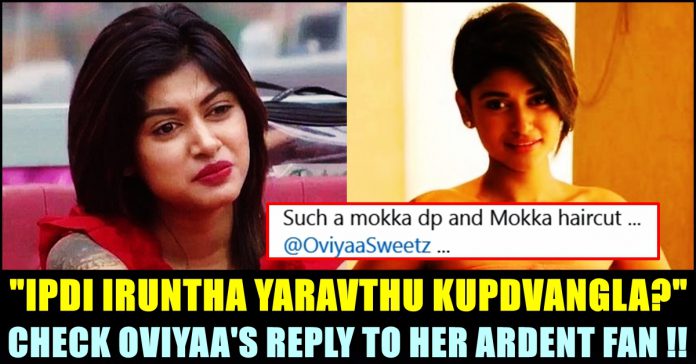 Oviyaa is the new Taapsee in town it seems. Her fitting replies to her own fans irrespective of their lovely demands, winning hearts of the Twitter users. Usually cinema celebrities would please their fans in public to make them feel good. But these straight forward replies from the Kalavani actress is making them love her more. Her recent reply to a fan who asked her to change hairstyle is one of the solid example to prove that Oviyaa wants her fans to be better person rather than being a better fan girl/boy of her.

In the show, the actress attracted the audience through her bold statements and gutsy decisions inside the house. The actress confronted with almost all of her housemates inside the Bigg Boss house, including experienced dance choreographer Gayathri Raghuram and Ganja Karuppu. However the actress couldn’t make use of the fame she gained through Bigg Boss show as her movies after that show didn’t go well. But the fan base of the actress stayed the same and she continued to speak her heart out in public, including social media platforms.

Now, the actress who is pretty active in social media platforms, received a comment from one of her ardent fan. The fan who looked a bit disappointment due to her new hairstyle and display picture asked the actress to bring back her old look which she carried during her Bigg Boss times. He also posted a compilation of her pictures with old hairstyle.

Such a mokka dp and Mokka haircut … @OviyaaSweetz …
Y don’t you bring back that biggboss hair style.. pic.twitter.com/iOlofnOhc1

To this post, Oviyaa, without a second thought replied by saying that she wants to grow her brain not hair. She wrote “I’m trying to grow my brain not hair .. my hair my skin my gender doesnt matter my dear .I’ve always been a libertarianWoman in lotus positionand we are all beautiful”

I’m trying to grow my brain not hair .. my hair my skin my gender doesnt matter my dear .I’ve always been a libertarian🧘‍♀️and we are all beautiful 💁🏻‍♀️💁‍♂️

However the worried fan continued to argue with the actress by saying that no one would call her for shop openings if she continues to have such hairstyle to which Oviya said that she would keep a wig and asked him not to worry.

I want my fans to be leaders .. dnt worry na wig vachkire 👱🏽‍♀️

Previous articleActress Revealed That She Got Kissed By Kamal Without Her Consent !!
Next articleFans Compared Rashmika With Vadivelu !! Actress Replied

Atlee saying that his movies are performing extremely good in box office in an interview is trending now in the micro blogging social media...

Post the release of "Vendhu Thaninthathu Kaadu", makers of the film conducted a "Thanksgiving" meet. In the event, Simbu addressed about the people who...