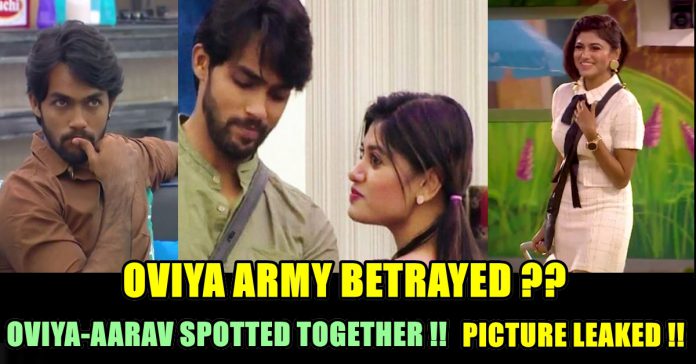 Are former Bigg Boss Tamil contestants Oviya and Aarav still in love? Fans are wondering if the couple is still together after all the drama that occurred during their stay in the first season of Bigg Boss house.

The speculations are fuelled by a photo of rumoured Oviya and Aarav, believed to be in Bangkok, began making the rounds on social media. It is not clear if the couple in the picture are the ex Bigg Boss contestants or somebody else. Nonetheless, fans were quick to assume that it is none other than Aarav and Oviya.

The snap, which has gone viral on Twitter and Facebook, shows the girl holding the boy’s hand. Hardcore fans of Oviya do not want the two together as Aarav had snubbed her in the Bigg Boss house. But the rumour doing the rounds is that they are in a live-in relationship. Oviya was madly in love with Aarav when they were in the Bigg Boss Tamil show. Initially, he had shown interest but surprisingly ignored her after she seemed serious about their relationship.

#BiggBossTamil #BiggBoss2Tamil armies have started to battle for their favourite contestants. Keep them at a distance and enjoy the show, don’t get betrayed and cry foul like Oviya Army. pic.twitter.com/9vx1j4QEGK

Oviya was cornered by the inmates in the house and Asrav’s changed mind on their relationship had almost pushed her into depression. This had forced her to leave the show midway. Later, Bigg Boss host Kamal Haasan pointed out how Aarav’s behaviour had affected her.

The audience too was upset with the same and the actor was slammed for “cheating” on her. Nonetheless, once the show ended, with Aarav winning the first season, he was asked about his relationship with Oviya on numerous occasions. The actor had said that he required time to take a call on it as he needed his family’s approval.

Nonetheless, the couple was spotted together after that as well, comment what is your view on this below.

J.K Ritheesh who is a former Member Of Parliament and actor died today due to cardiac attack at Ramanathapuram. He was last seen in...