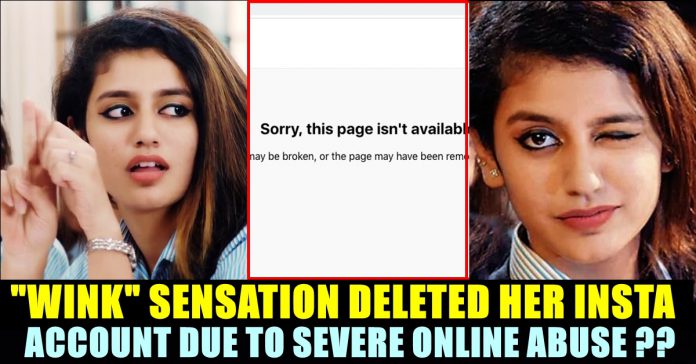 Internet sensation Priya Prakash Varrier who is known for her works in Malayalam film industry, deleted her Instagram account which had more than 70 lakh followers. She who rose to fame with her winking and fire gun kissing expression only to become an overnight internet sensation with millions of social media followers within a short span. She is one of the very few Indian celebrities to reach 7 million followers in such a short time. After that video clip went viral, she received several movies offers from many movie makers across the country. The clip which helped her to gain fame belongs to a 2017 film named as “Oru Adaar Love”. At that time, She was suddenly the new sensation as netizens addressed her with titles such as the ‘National crush’ and ‘National love interest’ and all eyes were set on her with several endorsement deals went her way.

Oru Adaar Love turned out to be one of the much-anticipated films of Malayalam film industry after the release of the promo. However, when the film finally released on Valentine’s Day, it failed to live up to the expectations. Critics panned the movie, and it turned out to be a mediocre hit at the box office.

However, it doesn’t stopped Priya’s fame who is an active social media user across several platforms. Before deleting her Instagram account, Priya had 7.2 million followers which she gained in a very short period. She disappointed her followers by deleting her account which is evident through their posts in other social media platforms.

While there are many speculations doing rounds saying that she deleted the account due to severe trolling and online abuse, a reliable source has reported to media that she did it for no specific reason. The actress had decided to take a break from social media platforms and is exoected to return when she feels like.

However, her other social media accounts such as Facebook and Tik Tok are still active and her fans are expecting her to provide updates through them. On the work front, Priya is expected to appear in the long delayed Bollywood film Sridevi Bungalow, directed by Prasanth Mambully. The film garnered attention after Sridevi’s husband Boney Kapoor slammed a legal notice against the filmmakers and demanded them to change the plot and title of the film.