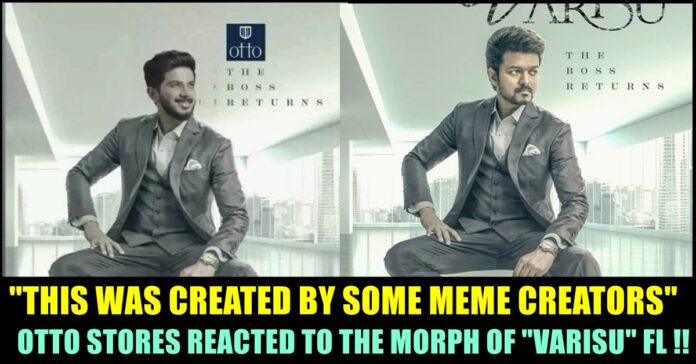 Official social media handle of OTTO stores reacted to the poster that was made trolling the first look poster of Vijay’s most awaited film “Varisu”. Through the post, OTTO company said that it is not responsible for the poster that is doing rounds morphing their model actor Dulquer Salmaan and wished the best for the upcoming film of the “Thalapathy” actor.

The most awaited first look of Vijay’s 66th project got released a day ahead of his 48th birthday. Titled as “Varisu”, the poster is receiving mixed reactions from the online fans as the film incidentally became the actor’s one of the most less hyped movies in recent times. The poster showed Vijay donning a coat suit in the background which is seemingly a foreign country. “The Boss Returns” read the caption under the title “Varisu which is expected to be Vijay’s come back movie due to the disappointment “Beast” provided to his fans.

Actor Vijay shared the title look in his official twitter handle and the post garnered 300k plus likes in no time. Here’s the poster :

As soon as the poster got released, many kind of reactions were surfacing in the internet among which a number of online users came up with a post trolling it as an advertisement of a clothing company.

Reacting to the morph, the official Instagram handle of “OTTO” came up with a post clarifying about the same. “We, at Otto, are committed to originality and don’t take Intellectual property infringement lightly. The above image is not in any way related to Otto and was created by some meme creators, only for entertainment purposes. We would like to wish the Varisu team a good luck from our side!” OTTO company said.

Directed by Vamdi Paidipally, the film’s ensemble cast includes, Rashmika Mandanna, Sarathkumar, Prabhu, Prakash Raj, Shaam, Srikanth, Samyuktha, Khushbu, Yogi babu and others. Dil Raju is producing the film under his own banner “Sri Venkateshara Creations”. The film is expected to release around January 2023. Post “Varisu”, Vijay has reportedly committed director Lokesh Kanagaraj to direct his next film which is tentatively titled as “Thalapathy 67”.

Anand Devarakonda Hits Back At Popular Actor For Mocking His Brother !!

A Bollywood actor named as Gulshan Devaiah criticized Vijay Devarakonda for his recent statement on voting system. In defence, Anand Devarakonda, brother of the...

PUB-G Got Banned Along With 117 Others Apps !! Full Details Here