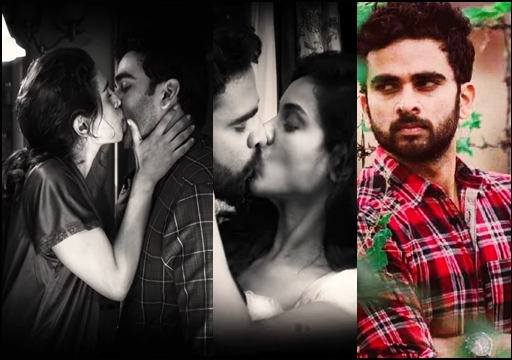 In a friendly banter with his “Hostel” co-star Sathish, Young and emerging actor Ashok Selvan referred to a famous dialogue of actor Vijay Sethupathi from “Master” movie. He used the “Ostrich egg” dialogue to Sathish who trolled him for pairing up with 25 heroines per year after the announcement about one of his upcoming projects titled “Nitham Oru Vaanam” was made. It was announced that three heroines Ritu Varma, Aparna Balamurali and Shiva Athmika are going to play female leads in the film which triggered Sathish to fire shots at the “Soodhu Kavvum” acttor.

On Thursday, glimpse of Venkat Prabhu’s “Manmadha Leelai” was released and the 40 second long clip showed the 32 year old actor lip locking with his heroines such as Samyuktha Hegde, Smruthi Venkat and Riya Suman. The glimpse video became sensationally viral in no time due to the content it carried.

Watch the glimpse video video below :

In his recently released film “Theeni”, the actor paired up with Ritu Varma and Nithya Menon and his career best “Oh My Kadavule” had dual heroines as well. Ashok happened to share screen with Vani Bhojan and Ritika Singh in the film. The actor is also working on a film named “Hostel” and is pairing up with Priya Bhavani Shankar in the film.

Reacting to the comment of Sathish who trolled him for pairing up with several heroines in each film, Ashok referred to the famous dialogue of Vijay Sethupathi from Master and replied “Haha. Ostrich muttai theriyuma bro?!”

Meanwhile, the glimpse the “Manmatha Leelai” garnered huge reception among fans and celebrities. From Simbu reacting while releasing the glimpse in his official twittter handle to SJ Suryah expressing his shock over it, glimpse of the Venkat Prabhu quickie has raised the expectation level.

Hahahaha this is going to be fun @vp_offl saar

Congrats to the team

Comment your views on the glimpse of “Manmatha Leelai” and the reactions it is receiving !!

After seeing his name trending in the micro blogging social media site, Indian cricketer Ravichandran Ashwin who is being considered as the representative of...

First Tamil Movie To Be Premiered With Pay Per View Method !! Reactions Pouring

Aishwarya Rajesh and Vijay Sethupathi's "Kanavar Peyar Ranasingam" will be getting a direct online release on pay per view portal Zee Plex. The film...