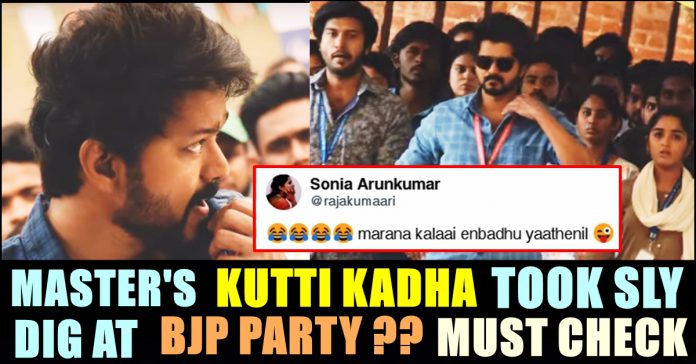 The most awaited Oru Kutti Kadha from Master has released on youtube by actor Vijay himself. The feel good motivational song sung by the actor himself and the lyrics were written by Arunraja Kumararaja. Music director Anirudh also can be heard lending his voice for the song. As soon as releasing the song received more than 5 lakh views so far. The song was made in a way of compiling the audio launch speeches of the actor where he would tell a “Kutti Katha” to his fans.

The lyrical video which was made in a way to attract the kids, had the miniature version of Vijay himself for the first time. It also contained four pictures of Vijay from the film as professor which is going to rule the profile pictures and whatsapp dp’s of Vijay fans. The most special thing about the lyrical video is that the makers have added the most recent selfie incident that took place in Neyveli and the way they addressed the deadly disease Corona. Completely intending to spread positivity, the song motivated the students of current society. It also resembled “Why This Kolaveri Di?” of Anirudh which became a blockbuster world wide.

As soon as the song released, many fans who got attracted to it has been expressing their thoughts and opinions about it. We can also see social media users posting their favourite lyric from the song to show their love towards the song. Meanwhile, few fans who watched the song are thinking that this song was also made to give reply to those who are confronting actor Vijay in recent times.

Capturing a particular slide from the song as screenshot, many fans are alleging that the song is taking a sly dig at political party BJP. Considering the cartoon characters being colored in orange, they are comparing them to BJP members whose color orange. “Don’t be the person spreading hatred” is what Vijay sings when the above mentioned sequence appears.

What the screenshot here :

Check out some of the reactions from the users of social media users for this particular lyric :

Dont Be the Person Spreading Hatred

Recently Vijay was raided by income tax officials and the fans of the actor are highly believing that BJP are the core reason behind it. During the shooting of “Master”, I-T officials entered the spot and demanded Vijay to cooperate their operation. Meanwhile Master is slated to release on April and the next updates from the makers of it about teaser, trailer and audio launch is awaited.

Comment your views on the first single of “Master” !!

Previous articleBIGG BOSS Kavin’s Message To Vignesh Shivan !!
Next articlePrabhu Deva Missed To Act In This Blockbuster Film Because Of This Reason!! WATCH