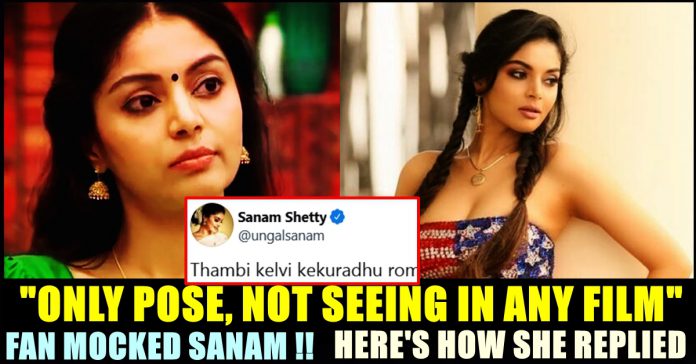 Sanam Shetty of “Bigg Boss” fame reacted to a twitter user who trolled her for only posing and not getting any movie opportunities. On seeing the actress uploading pictures from her photo shoots, ever since coming out of the Bigg Boss house, the user shot the question through his comment to one of her recent posts. Replying to him, the aspiring actress said that questioning an individual is easy and she is ready to act in a good script that comes in her way. Reacting to her tweet, many other followers of her could be seen suggesting her various ideas to get a break in her career.

Sanam shetty, one of the most loved contestants of Bigg Boss season four, is pretty much interactive with her followers in social media platforms. Being a model by profession said that she has been trying to take part in the Bigg Boss show for past three seasons and always gave her best to stay inside the house. In the show, for showing her determination in the topple task, Kamal Haasan who hosted the show appreciated her.

Sanam gained a fan following for herself by raising voice in the issues that are taking place in the house. Her confrontations with Balaji Murugadoss while performing the tasks provided by Bigg Boss, grabbed headlines. Post Bigg Boss, Sanam became active in social media platforms with enormous number of followers supporting her.

Check out some of her recent Instagram posts below :

On Friday, Sabam came up with a picture in her official Twitter handle. Wearing an Angel-like red dress with a pretty make over, the actor wrote “Bloom in silence” as her caption.

Reacting to this post, a followed whose twitter handle name read “Mokkaiyan” dropped a comment writing “Only pose . Not seeing in any Film” to troll her.

Only pose . Not seeing in any Film

Without losing her nerves, Sanam shetty replied him back with a kind reply. She said that asking questions is easy and wondered what she would reply. “Won’t I act in a good script that comes my way ?” she questioned him back. “Thambi kelvi kekuradhu rombo easy aana enna pathil solradhu …Nalla padam vandha naa panna maatena ?” read the reply of the Bigg Boss participant.

Check out some of the suggestions and comments she received from her followers :

Cook with Comali season 3 la participate pannunga, surely you can win the title and people's heart too. innum 2 months la CWC 3 start aagidum, quick ah try pannunga you are the perfect contestant for CWC. We are eagerly waiting for seeing you on CWC 3 set😍😍😍

Previous articleTamil Actor/Director Raised Voice For The Residents Of Arumbakkam !!
Next articleBJPians Spewed Hatred At G.V Prakash For Prioritizing Language Over Country !!

Heroine Adjusted Her Make Up During A Discussion About Sushant !!

Actress Sanjjanaa Galrani having a tough time since the noon of Sunday as she caught adjusting her make up during a live discussion about...