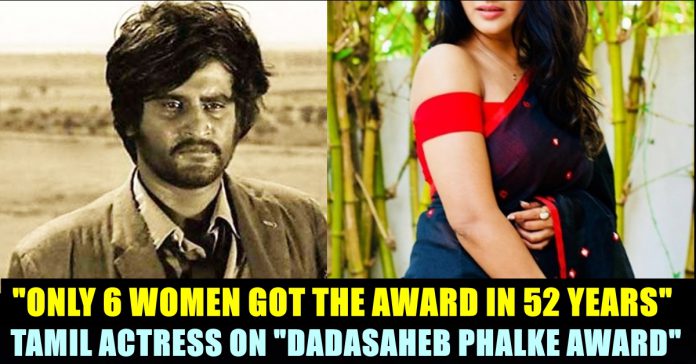 While the entire nation is wishing Superstar Rajinikanth for achieving the feat of behind honoured with the Dadasaheb Phalke award, popular Tamil serial actress Sharanya questioned the “Disparity” of Indian government. She mentioned that only 6 women have received the award so far and the last one to get the award was Asha Bhonsle and pointed out the fact that it happened 21 years ago. Sharanya who expressed her opinion through her Instagram story, also uploaded the screen shot of Kamal’s wishes and said that it would have been avoided.

Actor Rajinikanth who is fondly called as “Super star”, “Thalaiva” and predominantly worked in Tamil film industry will be honoured with the 2019 Dadasaheb Phalke award. The announcement was made by Information and Broadcasting Minister Prakash Javadekar in the morning of Thursday.

The announcement emerged days before the assembly elections which is scheduled on 6th of April. While questions were raised on the connection with the large fan base of Rajinikanth and the assembly elections, Union Minister Prakash Javadekar responded saying “This is an award related to the film world and Rajinikanth has been working for 50 years…one must ask proper questions,”

From Prime minister Narendra Modi to the actor’s long time friend and Makkal Needhi Maiam president Kamal Haasan, almost all the celebrated personalities from the country wished him the best for the achievement. “Popular across generations, a body of work few can boast of, diverse roles and an endearing personality…that’s Shri @rajinikanth Ji for you. It is a matter of immense joy that Thalaiva has been conferred with the Dadasaheb Phalke Award. Congratulations to him.” said Prime minister Narendra Modi in his tweet.

Responding to it Rajinikanth wrote “Immensely humbled and honoured with your greetings and the most prestigious #DadasahebPhalkeAward award respected and dearest Shri @narendramodi ji. My heartfelt thanks to you and the government of India” and also released a press note to express his gratitude.

Immensely humbled and honoured with your greetings and the most prestigious #DadasahebPhalkeAward award respected and dearest Shri @narendramodi ji. My heartfelt thanks to you and the government of india 🙏🏻 https://t.co/XT9X6paSNT

Many other celebrities from various film industries wishes Rajinikanth for his feat. Entire Country Wished Rajinikanth For His Achievement Of Winning Dadasaheb Phalke Award !! Now, actress Sharanya who is known for acting in a number of serials in Vijay Television and Sun Television, came up with an Instagram story questioning the “Disparity” of Indian government.

Check out the screen shot of it below :

In another story, Sharanya shared the screen shot of Kamal’s wishes and said Kamal could have avoided wishing instead of posting such as cryptic tweet.

Who Will Be Declared As Winners If Match Abandoned Today !! : Here’s The Answer You Want to Know !!

Chennai Super Kings and Sunrisers Hyderabad somewhat escaped the frantic race for the knockout spots during the group stage owing to their consistent performances...

“She Should Have Stayed At Home If She Feels So Sick” – Vaishnavi On Mumtaj !! : New Promo Exposes Deep Hatred !!