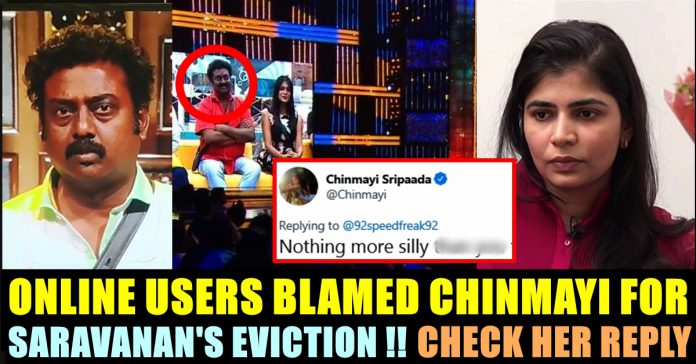 Chinmayi, most probably the first celebrity to react on Bigg Boss Saravanan’s comment on harassing women in government bus. On 29th July, while Kamal Haasan was discussing about the issue between Cheran and Meera, Saravanan confessed that he boarded government bus during his college days only to grope women. However the actor apologized on the next Monday for his inappropriate comments after the issue debated in national level. Chinmayi on watching the clip of Saravanan’s confession, posted a tweet saying, “A Tamil channel aired a man proudly proclaiming he used the Public Bus Transport system to molest/grope women – to cheers from the audience. And this is a joke. To the audience. To the women clapping. To the molester. Damn.” Now the actor got terminated from the show by the Bigg Boss management as the issue elevated to the next level. Now few online users started tweeting against the singer for Saravanan’s instant elimination. They even alleged that the singer made an issue by making her presence in the Vijay Television office which made them to eliminate the contestant.

This is just stupid. @Chinmayi you’re stupid. I’m not supporting but this is pure bull crap. That man apologized. Now his career is at stake. Feminist? First be a human and learn to forgive! https://t.co/wn5k83kwRy

Nothing more silly than you trusting a random meme page.

She even replied to few of those who blamed her for the eviction of Saravanan. Check out her replies to them here :

I dont watch the show. You do. Someone tweeted it to me and I reacted on why the channel had to air the applause. Read my tweet and learn yourself.

Ok. I m no one to forgive him. Since my mother was not in a bus with him and didn’t get groped.

Sorry. A lot of the men in society aren’t raised to press their penises or grope women’s breasts in public transport.
Please don’t judge everyone like yourself 🙂

What do you think on these replies of Chinmayi ?? Comment your views below !!

“Is Robert My Husband Or Boyfriend?” Vanitha Questioned

Reacting to the entry of dance choreographer Robert Master inside the Bigg Boss house, former Bigg Boss contestant Vanitha Vijayakumar, in her show with...

After a number of Instagram chat screen shots that got surfaced in social media platforms, a shocking allegation against Bigg Boss fame Daniel sexually...