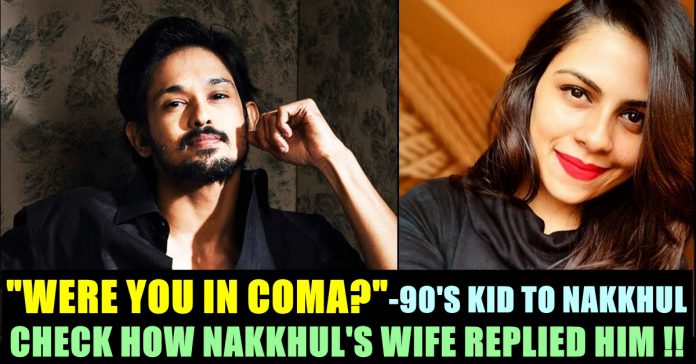 The verbal war between 90’s kids and the kids who were born on 1990’s has always been a never ending one. Their co-existence in social media has always created furore when it comes to a debate on who lived in the most special decade. 90’s kid are the people who were born between 1990 and 1996. They are ruling the Internet as they are the highest number of people who are active in social media platforms comparing to the others.

Recently a post shared by actor Nakkhul regarding the people who were born before 90’s has hurted the feelings of a 90’s kid it seems. Nakkhul is a Tamil film actor and playback singer. Being brother of film and Television actress Devayani, he debuted as a lead actor in the 2003 film Boys directed by S. Shankar, in which he also sang his first song in the film’s soundtrack album.

The recent Instagram post of the actor which was merely a repost, said that people who were born in the 50’s, 60’s, 70’s and 80’s are the last generation to be played in streets. It also said that they are the people who played video games first and the last to record songs off the radio. It further added the specialities of being a person who was born in that particular period, especially about the fact of being a generation without using any technology and social media platforms.

#Repost @faroutakhtar with @get_repost ・・・ Talking about my generation. ❤️

On seeing this post of Nakkhul, a random instagram user who is most probably a 90’s kid got offended and wrote “Then what about 90s ?. Did android and ios kind of stuff just popped on in the early 90s eh?. Or were you in coma from 90s to 20 huh😒😏” to express his emotion.

On seeing this comment from the user, Sruthi, wife of Nakkhul found the comment as a disrespectful one. She immediately replied to his comment by writing “Hey keyboard ninja ! There’s a nice way to say thing ! I’m from the 90s too and I don’t see what’s so offensive about this ? It’s not like he wrote this post ! He’s just reposing ! You’re more than welcome to disagree with it but don’t go around spewing hate !”

We all know that it is not that easy to avoid the attention of media and public for a well known celebrity. Nakkhul married to his long time girlfriend Sruthi Baskar on 28th February 2016. Actor Nakhul’s Wife Shuts Down All The Trolls Which Criticized Her Height !! Here’s How Nakkhul Reacted !!. The adorable couple often shared the cutest moments of them together in their social media accounts. Going by her Instagram profile, Sruthi seems to be a Television host and Chef.

“How Will You Manage Dancing With Sai Pallavi ?” Anchor Question SK !! Fans Got Offended

On seeing a television anchor questioning Sivakarthikeyan about how will he manage dancing with Sai Pallavi who is known for her flexibility while dancing,...