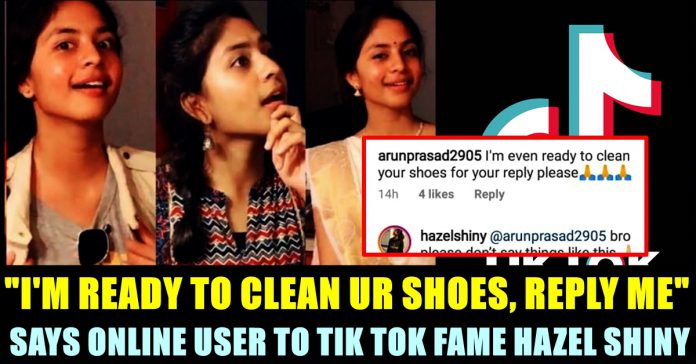 Social media platforms such as Facebook, Instagram, Twitter is a place where anyone can interact with the people they like. Back then people couldn’t interact with the celebrities they like but ever since the existence of social media platforms whoever can talk to their favourite celebrities but one couldn’t say whether they are going to get a reply or not.

In order to get a reply from their favourite celebrity, we have seen followers requesting for it in comment section. But this guy from Instagram went one step ahead and made a comment which could not be refused. Hazel Shiny is a popular young girl who is known for her stint in micro video posting social media platform, Tik Tok. She enjoys more than 14 lakh followers in Tik Tok which gained her more followers in other platforms such as Youtube and Instagram.

There is a very slight chance for anyone using a smartphone may not have come across a Tik Tok video showing a young netizen lip-syncing to a song. Launched in 2016 and originally called Musically, TikTok is one of the most popular apps today. Last year, it was also one of the most downloaded apps on Google Play and Apple Store.

Being a daughter of popular filmmaker Prabhu Solomon, Hazel Shiny is very much active in Instagram as well. Recently she posted a picture of herself with her mother in her Instagram account with a caption saying “அம்மா என்னும் மந்திரமே அகிலம் யாவும் ஆழ்கிறதே :)Everything’sgettingbetter 🖤”

One of her fan and follower who witnessed this post in his Instagram feed, in order to get a reply from the Tik Tok celebrity, offered to clean her shoes. He wrote “I’m even ready to clean your shoes for your reply please🙏🙏🙏”

This comment from the online user embarrassed not only Hazel but his co-online users as well. On seeing this comment, Hazel Shiny immediately replied with a comment saying “bro please don’t say things like this 🙏🏻 thank you for your support 💯🙏🏻”

This comment from the user irritated other followers of Hazel Shiny who asked him not to post such comments for a reply :

People in the social media platforms often thinks that the things they are doing in it are going to stay private forever. But they must realize that it would become public sooner than they think and would spread faster than they assume. What do you think on this absurd comment made by the Instagram user ?? Comment your views below !!

Previous articleChennai Man Found The Location Of Vikram Lander !! WATCH !!
Next articleBigg Boss Celebrity Forced By Fans To Announce About Her Pregnancy !!

Ulaganaayan Kamal Haasan and Superstar Rajinikanth are the two pillars of Tamil cinema. Every aspiring actor who wants to be an actor in Tamil...

“Vadivelu Is The Most Original Actor”- National Award Winning Director !!