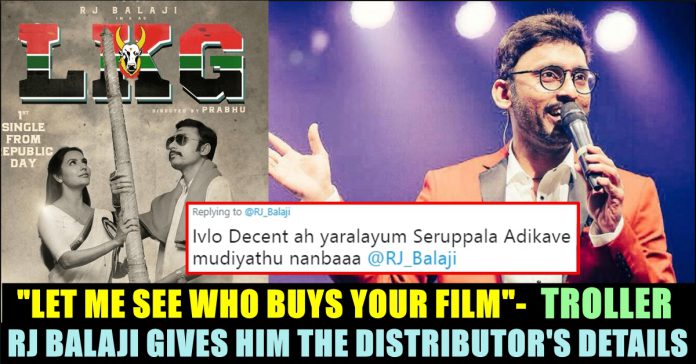 The way RJ Balaji handled one of a twitter user who tried to mock him and his upcoming film LKG impressed some of his followers. The trailer of LKG is releasing today according to a tweet of Balaji who is acting as lead for the first time. 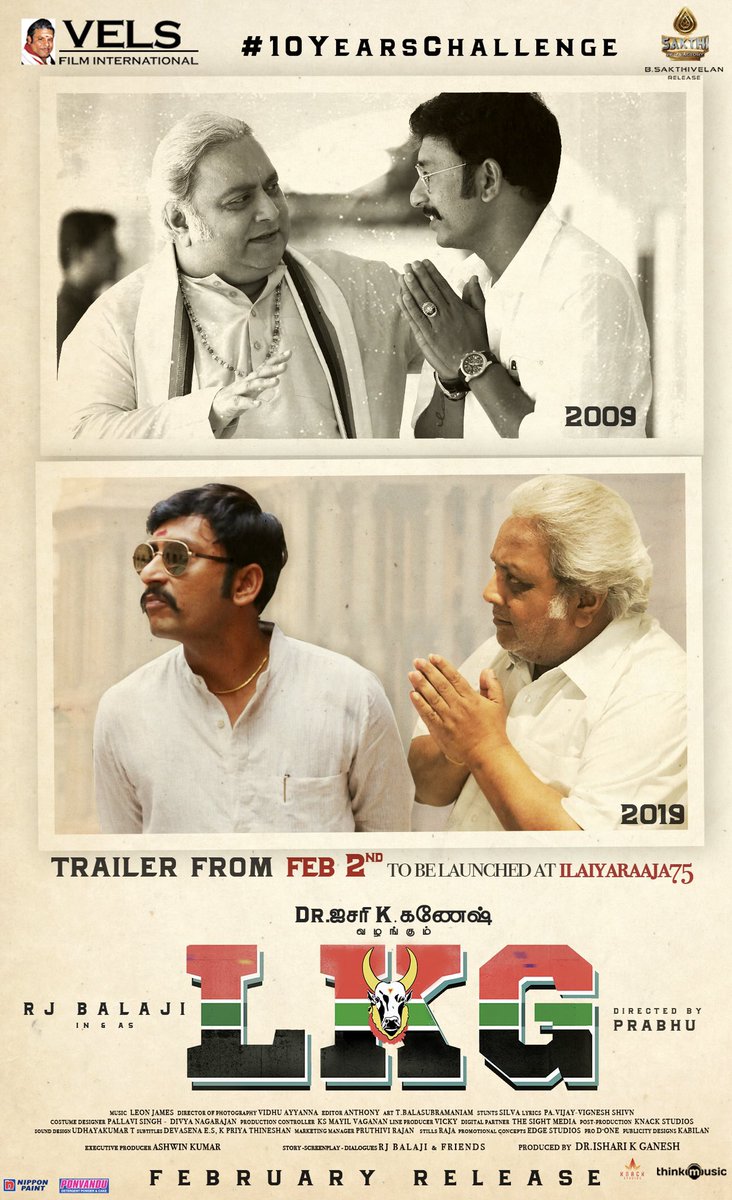 The actor took his official twitter account make the announcement of his trailer release. With a poster which featured all the chief ministers of Tamilnadu, the former radio jockey, made the announcement by writing “நாளை முதல் LKG trailer.! 😍
#LKGtrailerFromFeb2nd #TharamanaSambavam06″

To this tweet Kavitha pandian, creative producer of AandP groups, who bought the overseas rights of the film expressed her thoughts in the comment section. Here is what she wrote :

RJ Balaji thanked her and said to his followers that Mr. Arun Pandiyan has bought the overseas distribution  rights of the movie LKG :

To this tweet one of the twitter user named Ramesh Krishnan harshly criticized Balaji and his film LKG by writing “Overseas boni panniyachu.. Ana nee panra settaiku inga evan vanguranu papom..” (You sold it in overseas, Let me see who buys this movie after all seeing your pranks)

Unlike other celebrities who would not mind these kind of trolls and mockeries from random twitter users, RJ Balaji responded immediately. In his reply tweet he wrote “Sakthi film factory dhan Tamilnadu rights vaangi irukaanga sir… I see from your profile, that you have children, உங்க profileம் அதுல நீங்க மரியாதை இல்லமா பேசுறதும் அவங்களுக்கு தெரியமா பார்த்துக்கோங்க… Plz dont let that happen. For them, their father is a hero .!”

His reply impressed some of his followers and they expressed their thoughts as well :

RJ Balaji, is an Indian radio jockey, presenter, comedian and actor based in Chennai, Tamilnadu. He is best known as the host of the BIG 92.7 show Take it Easy and its now defunct segment Cross Talk, where he made prank calls to unsuspecting victims.

After appearing in supporting roles in many Tamil films, the actor now is playing the protagonist role in a film named LKG which is a remake of Kannada film “Humble Politician Nograj”. LKG will be a political satire that aspires to educate the audience about what happens behind the screen. The team has spoken to around 60-70 politicians including senior leaders, MPs, ministers, and MLAs.