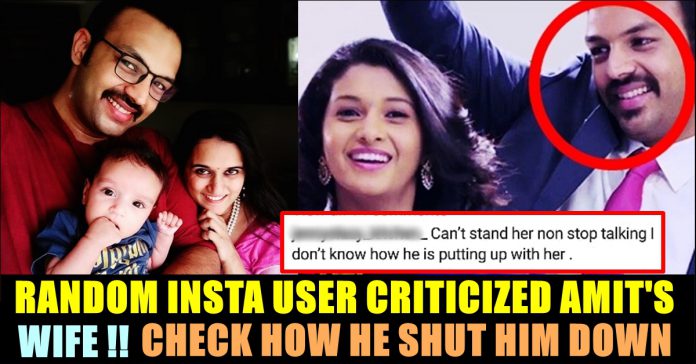 Amit Bhargav is a TV actor who rose to fame through Vijay Tv serial Kalyanam Mudhal Kaadhal Varai in which he paired opposite to Priya Bhavani Shankar. After that serial he appeared in several shows of Vijay TV and in few more serials of the same channel. The actor made his appearance in big screens through high profile films such as 2 states, Yennai Arinthaal, Miruthan as well.

Later he married to television anchor and radio jockey Sriranjani and the couple made their presence in many shows together and acted together in a short film directed by Fully Filmy fame Raunaq. They gave birth to a baby girl earlier this year and shared the happy moments in their respective social media accounts.

Many of you have been asking me to share a pic showing my daughter's face. But we were waiting for her to complete 100 days since birth. To commemorate this Independence day and to proudly present our beautiful angel to the world, here are some pictures of VEDA SRI BHARGAV @chennai_super_queen #happyindepenceday

As we all know Internet is not a place where we could always seek positivity. The couple recently posted a video sharing their experience in an outing they went. In the video we could see both them sharing the lovely pictures of themselves and the place they went.

@sriranjani__ and I went on a date to this new place that's opened up in T Nagar called @kommunelife . We had a great time thanks to the live music, match screening and of course, the great food. Taking a break and really getting to unwind doesn't happen often so yay to us for getting it right!

On seeing this comment of the Instagram user, Amit who thought of giving him/her a perfect reply, in his reply comment, said “put up with her? I dunno what I’d do without her” which won the hearts.

Check out the screenshot of his reply here :

This lovely reply from the actor must have made his wife happy. Amit, indeed has exhibited how a man should have his wife’s back when she faces criticisms. What do you think on this reply from Kaathal Mudhal Kalyanam Varai Arjun ?? Comment your views below !!

Jonty Rhodes Shuts Down A Troller Like A “BOSS” Who Mocked Him Directly !! Check Out !!

Former South African legend Jonty Rhodes is regarded as one of the best fielders of all time. Recently Rhodes had applied for the post of...