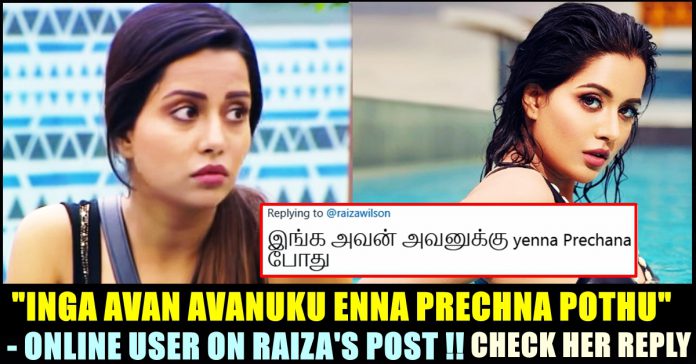 For uploading a twitter post lauding Chicken Biryani, an online user criticized actress Raiza Wilson saying that it is an inappropriate post at this time which is when people are dying in large number of COVID 19 virus. Immediately replying to him, Raiza who called him as a “nameless”, asked him to say which would be appropriate to post now by adding a laughing emoji.

Tamil Nadu recorded 29,272 fresh COVID-19 cases on Tuesday which is the single biggest day spike so far, pushing the caseload to 14,38,509 while 298 deaths in the last 24 hours took the toll to 16,178. 19,182 people were discharged, taking the tally to 12,60,150, leaving 1,62,181 active infections, says reports. The country is witnessing several deaths due to the emergence of the second wave of COVID 19 virus. The lack of medical facilities such as ventilator beds and oxygen cylinders worsening the situation even more by increasing the death toll in daily basis.

Many celebrities with highest number of followers has been sharing SOS posts in their social media handles. Shraddha Srinath, Taapsee Pannu, Samantha Ruth Prabhu are some of the female celebrities who has been sharing about the urgent medical requirements of people in their official social media handles. Meanwhile, actress Raiza Wilson who is known among Tamil audience for appearing in the first season of Bigg Boss show as one of the contestants, uploaded a post in her Twitter timeline rating Chicken Biryani and Mutton Biryani.

“Chicken biryani is better than mutton biryani. I said what I said” she said in her post which blew up among her followers in no time. Check out her tweet below :

Chicken biryani is better than mutton biryani. I said what I said

Many of her followers who saw this tweet, started criticizing her saying that it was an untimely tweet as people are dying of COVID 19 virus. Check out some of their reactions below :

People are dying here and celebs are taking initiative to help people out there
And this b**ch is discussing about food🤦..A waste of sperm indeed💦

Replying to the one who said that her tweet is inappropriate, Raiza said “Ok so please tell me – what according to you (your incredible knowledge and experience) is appropriate to post now Mr…. nameless”

Ok so please tell me – what according to you (your incredible knowledge and experience) is appropriate to post now Mr…. nameless 😂

Previous articleSonu Sood Finally Answered On Becoming The “Prime Minister” Of India !!
Next articleWhen A Chennai Based Girl Used Tinder To Initiate A Blood Donation Drive !!