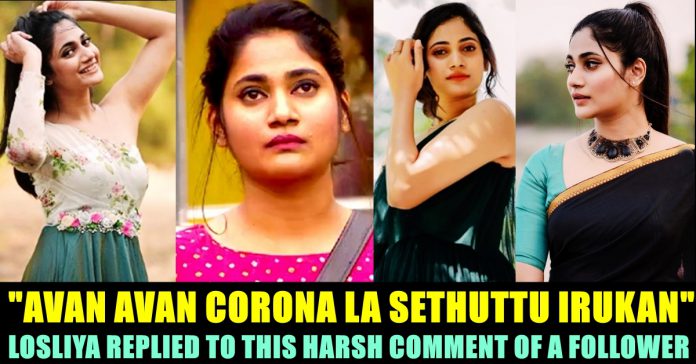 For uploading pictures from one of her photo shoots in her Instagram space, an online user threw shade at upcoming actress Losliya Mariyanesan. He condemned her for involving in such online activity while people are dying of COVID 19 virus. Losliya who is pretty much interactive with her online followers since coming out of Bigg Boss house, didn’t fail to notice the comment and gave him a reply to shut him down once and for all.

Losliya who became an overnight sensation through her Bigg Boss stint, is currently having three film projects in her kitty. She took part in the third season of the Kamal Haasan hosting show in which Mugen rao grabbed the title. Sandy became the first runner up where as Losliya was pushed to the third place. Since the show, Losliya is actively conducting photo shoots and has been sharing pictures in her Instagram handle where she is enjoying 14 lakh followers as of now.

On Monday, she uploaded a series of her pictures from one of her recent photo shoots. Adding the captions “Fight Alone 🍂”, “Be kind ☺️”, Losliya uploaded seven pictures by giving credits to the technicians. Check out her posts below :

Both the posts garnered 2 lakh plus likes in no time with various kind of reactions from her followers and other users of Instagram. One of them named “Neelamegam”, dropped a comment criticizing Losliya for participating in a photo shoot amidst the COVID 19 pandemic. “People are dying of COVID 19 virus, you really needed this photo shoot now ?” he asked by writing “Avan avan coronala sethutu erukan unaku photo shoot kekkutha”

279 users of Instagram supported the comment of Neelamegam by “liking” it. Replying to the comment, Losliya asked him to stop using Instagram in order to avoid seeing any kind of posts. “Kindly don’t use Instagram. So that you won’t be able to see any posts brother” Losliya said in her reply and received as much as 2855 likes for it.

On the work front, Losliya is going to be a part in a project produced by “Axess Film Factory”. In one of her upcoming projects, Losliya is sharing screen space with Indian veteran cricketer Harbhajan Singh. The film is also going to have action king Arjun in a prominent role. The film is going to be directed by debutant JM Raja Saravanan. Pooranesh who worked as executive producer with the production house is going to play the male lead, according to reports. In another project Losliya is going to pair with actor Aari who is known for appearing in “Maaya”, “Nedunjaalai” etc.