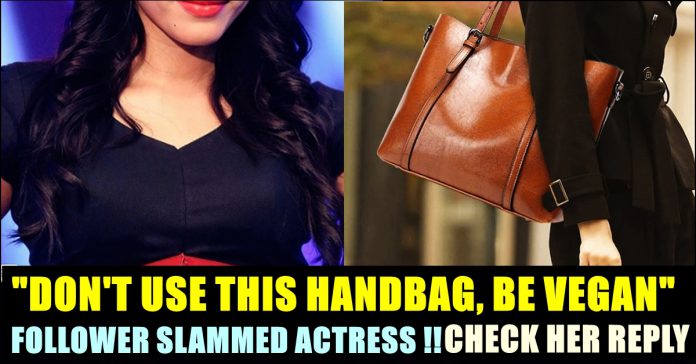 Online User Asked Tamil Actress Not To Use Leather Handbag !! Check Her Reply

Animal cruelty is considered as crime, not only in India but across the world. According to sources, with approximately 65 billion animals killed annually for food, farm animals are the most numerous animals subjected to cruelty. Laws concerning animal cruelty occur in different jurisdictions throughout the world. For example, some laws govern methods of killing animals for food, clothing, or other products, and other laws concern the keeping of animals for entertainment, education, research, or pets. There are a number of conceptual approaches to the issue of cruelty to animals.

Now, on seeing an actress using a handbag while posing for a group picture, one of her follower asked the actress not to use leather bags as it requires cow’s skin to be made. Actress Sai Dhanshika who is known for her appearance in movies like Kabali, Paradesi is the one who faced such comment from one of her follower.

Sai Dhanshika runs her photo posting social media account with nearly five lakh followers. In the group pictures posted by the actress, we can see her carrying a large handbag in her shoulders. “Post pack up atrocity’s 😂🤣 It’s been a while since I laughed my heart out & introducing my very own #Brosquad team” she wrote in the caption of her post.

To this post, one of her followers thought that the user is carrying a leather bag made of cow’s skin. The commenter pointed out that the actress posed with a cow in one of her earlier post but now she is using a bag made of its skin. “On one of your photos, you are loving a dairy cow, #dairyisscary , and in this one you are using a leather bag that came from cow slaughter. I will not be surprised if you took this pic after drinking milk. Go vegan please.” read the comment.

Sai Dhanshika who saw this comment from her follower, immediately replied to it by confirming that it is not a leather. She replied by writing “haha I infact against animal cruelty n I’ve been following for 10 years now btw it’s not leather 🙏”

Here’s the post of Dhanshika picture with a cow :

A day to a real life 🌼 Spending our whole day without any distractions.. Truly cherishing nature’s gift is just phenomenal Thank you for the whole experience @PRO_Priya #HappymaattuPongal🌞

Comment your views on this reply by the actress !!