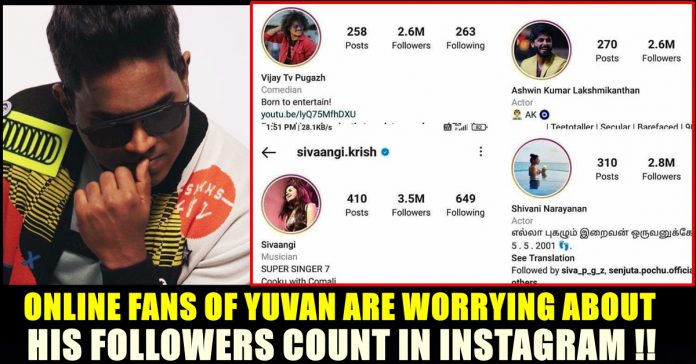 Yuvan Shankar Raja is one of the most influential music directors of Kollywood film industry. He who enjoys a fan base on par with a mass hero in Tamil film industry, never failed to disappoint them through his works. For the past two days, the followers count of the youth icon in the photo/video posting online application Instagram has been worrying the online fans of the musician.

They were comparing the followers count of the seasoned music director/singer with emerging TV stars such as Shivani Narayanan, Sivaangi, Pugazh, Ashwin and expressed their displeasure over it. As soon as the word got spread, more than 1 lakh followers increased for Yuvan in Instagram and it is expected to increase more.

Yuvan is a son of legendary music director Ilayraaja and debuted through Selvaraghavan’s “Thulluvadho Ilamai”. Despite of entering the industry with his father’s influence, the music director worked hard and gained a separate fan base for himself. He has composed music for more than 100 films in a span of 23 years of his musical career. He has acquired a huge loyal fan base for himself through his work. The forty one year old music composer is currently working on several projects and has turned as a film producer as well.

Nowadays, Yuvan who was not much active in social media platforms, started uploading posts from his photo shots and has been updating about his works. On seeing Yuvan being follower by less than 1 million followers, ardent fans of the talented musician started opining about it. It all started when a Twitter user named “Naai Sekar” uploaded a tweet saying “We live in a world where Shivani Narayanan has 2.8 million followers but Yuvan Shankar Raja has 871k followers :/”

We live in a world where Shivani Narayanan has 2.8 million followers but Yuvan Shankar Raja has 871k followers :/

Follower by this, a meme on comparing the followers count of Yuvan, Pugazh, Ashwin, Sivaangi, Shivani did rounds across all the prominent social media platforms. The meme showed Yuvan fans feeling sad about the fact.

However, many came up with reactions saying that Yuvan was not much active in social media platforms earlier and reiterated the fact that the followers count has nothing to do with one’s ability of winning people’s heart. “Yuvan has geniue followers without scrapping instagram algorithm. Its nothing about followers he is the best Music composing talent.” a twitter user said whereas a campaign on increasing the followers count of Yuvan got initiated.

Yuvan has geniue followers without scrapping instagram algorithm. Its nothing about followers he is the best Music composing talent.

As if yuvan is composing in instagram. Why this pointless take and all? https://t.co/3USrmTZTVZ

Previous articleCandidate Found Anupama’s Picture In His STET Result Sheet !! BIZARRE
Next articleSRK Conducted A Chat Session With His Fans & His Tweet About Vijay Got The Highest Reach

Actress Samantha has been going through a lot of negativity in her life ever since making a decision about her marriage life with Telugu...