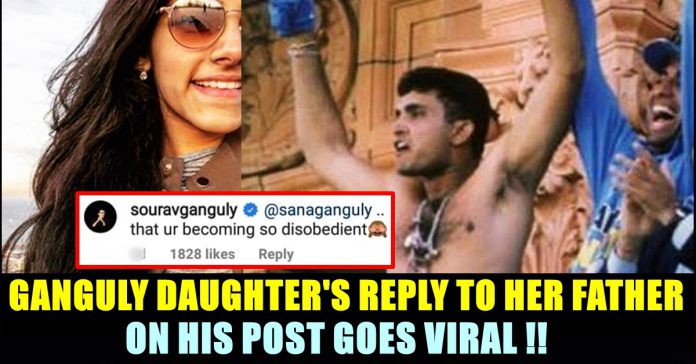 Sourav Ganguly, the former captain of Indian cricket team led the team during the world cup of 2003 where he managed to take the team till the finals. Unfortunately, the team lost to Australia and missed to win the cup for the second time. The left handed batting allrounder is known for his aggressive attitude in field. Though it has been so many years since his retirement, the fan base he earned still remains the same.

Fondly called as “Dada” by his fans, Ganguly was elected as the president of BCCI lately before which he did commentary in the world cup tournament. Among many other former cricketers, Ganguly is one of the active online user who uploads his pictures and updates in his official social media accounts regularly.

Now the cricketer has posted a picture of himself from the presentation ceremony of post match between India and Bangladesh in his official Instagram account. In the picture Ganguly was seen sporting a serious look which raised eyebrows of many including his daughter.

Sourav married his childhood sweetheart Dona Ganguly in 1997 after immense family resistance from both sides. The couple gave birth to a child in 2001 and named her as Sana. Now the 18 year old Sana who enjoys more than 50 lakh followers in Instagram has came up with a cheeky comment on her father’s post.

In her comment, Sana wrote “What is it that you’re not liking ?🤔”. Check out screenshot of her comment below :

On seeing this response from her daughter, Sourav Ganguly immediately replied by saying “That you’re being so disobedient”

Followed by this, Sourav probably wouldn’t have expected the reply coming from his daughter next. She wrote “Learning from you” and reminded the cricketer about his past life in cricket. Here’s the screenshot :

Sana must have mentioned the moment when Ganguly took off his shirt to celebrate a victory against England to take revenge on England cricketer Flintoff. Not only that, Ganguly was involved in many moments in which he impressed the fans with his gutsy decisions irrespective of the rules and regulations. He also happens to be the main reason behind India to play against Bangladesh in first ever pink ball test match.

“Just take a look around (fans with their camera lights on to click pictures). Do you see this? Have you seen this in Test cricket? When was the last time you had a capacity crowd watching a Test match? Feels like it is a World Cup final,” said Ganguly about introducing Pink ball in test cricket.

Previous articleWhy Producer Released “Kaithi” In Hotstar ??
Next articleChinmayi, A Devotee Of Nithyanandha ??