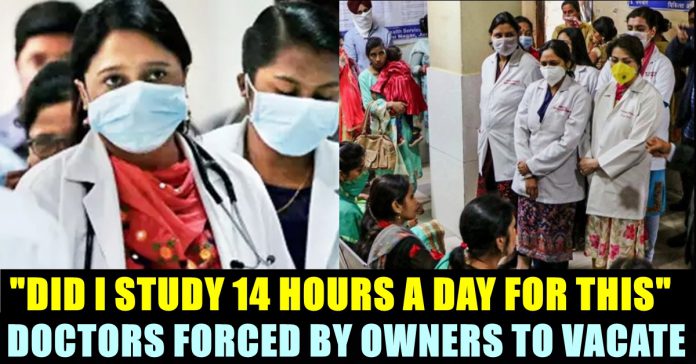 “One Owner Said That We Were DIRTY” Doctor’s Heartbreaking Statement !!

A Facebook post of a house surgeon is doing rounds in social media and it is heartbreaking to read. We all know the importance of doctors at this toughest situation. The deadly COVID 19 from China is threatening the entire world as it caused enough damage already across the world. Now, in this Facebook post, a house surgeon has alleged that Doctors are being forced to vacate their rented homes by their owners and the reason behind their activity is completely absurd.

The house surgeon who is working in MGM hospital, Warangal, Telangana has said that many doctors in the city were asked to vacate their rented homes by their owners because of the virus. He said that one of a owner called “Doctors” as “Dirty”. “This was done without any notice. Most of the doctors are now stranded on the roads with their luggage, with nowhere to go. The residents and house surgeons are the most affected. Did I study 14 hours a day for this ?” he said in his post.

“Our campus hostels were converted into isolation wards too by the orders of the district collector. This is happening in Andhra Pradesh too. We are working without any protective equipment everyday during this pandemic, without any holiday, without any stipend since 5 months while the nation is in lockdown. What were the claps and rings yesterday for ? Why do we have to risk our lives for their health, by keeping our health at stake if this is the way people treat us” he wrote in his facebook post.

Another house surgeon said that people do not understand the risks they undergo to keep them healthy. “It is really demotivating” he said. In a way of responding to the viral post, GWMC commissioner Pamela Satpathy said that the issue of accommodation has been resolved. She asked the people who are associated with medical fraternity to contact KMC Principal if they are facing any such issue.

Tamil filmmaker Vignesh Shivan who is known for directing films like “Naanum Rowdy Thaan”, “Thaana Serntha Kootam” also shared the new with a caption saying “Sad to read this !!!”

Sad to read this !!! pic.twitter.com/c8dEN5jFgP

This post went extremely viral and made people in social media extremely sad. The deadly coronavirus killed more than 18,000 people across the world. State Tamilandu saw its first death on the wee hours of March 25. The 54 year old man who tested positive on 23rd of March was undergoing treatment at Rajaji Government Hospital, Madurai, died. Health Minister Vijaya Bhaskar posted about it in his official twitter account at 2.02 a.m. Recently, health secretary has said 4.,500 retired healthcare workers have signed up to help battle the Coronavirus outbreak in UK. It is high time we should realize the importance of the doctors and must respect their selfless service.

Previous articlePeople Played Carrom In Front Of His House !! Check What This Tamil Filmmaker Did
Next articleActress Gives Back To Those Who Abused Her !!

Vijay Antony who got introduction in tamil cinema as music director, evolved as a hero and is now producing films. As he has a...