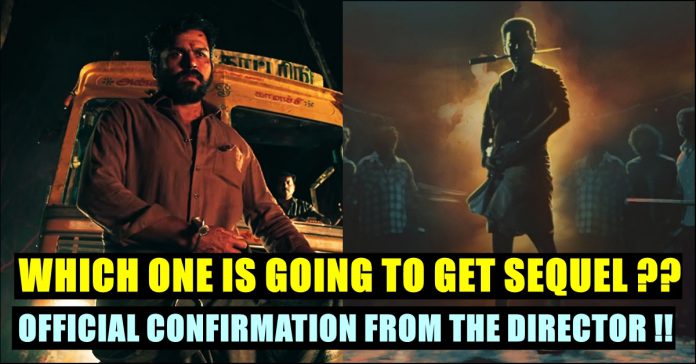 One Of These Movies Is Going To Get Sequel !! OFFICIAL CONFIRMATION !!

Bigil and Kaithi are two of the movies released for the Diwali festival of year 2019. As Bigil got most number of screens, despite of the limited screens it occupied, “Kaithi” is also getting good response from the people who watched it due to its grippy content.

The film “Bigil” revolves around a youngster who is an aspiring football player, diverts himself from his dream to take revenge of the murderers who killed his father. He then forms a women football team to achieve his father’s dream of providing an identity to his slum through excelling in football game.

On the other hand, “Kaithi” has Karthi as a released prisoner who spent 10 years in jail for a crime he committed. The film’s plot based on the moments that are happening in a single night and most probably the first film in Tamil to be shot entirely in night. The cat and mouse game between Police and drug lords, is technically strong and leaves the lead character “Dilli” without a strong conclusion which hinted the audience, a sequel.

Now, in a way of confirming it, director Lokesh Kanagaraj has posted a tweet in his official twitter account. The tweet which thanked the audience for the overwhelming response, confirmed that the is going to be a sequel.

“Thanx for the overwhelming response guys,.. loved every minute in sets and the entire process of making kaithi…will cherish this forever! Thank you once again prabu sir and karthi sir for the opportunity!..To answer all your txts and calls yes“ Dilli will be back”👍” read the tweet of Lokesh Kanagaraj who is currently directing actor Vijay in his next film.

Thanx for the overwhelming response guys,.. loved every minute in sets and the entire process of making kaithi…will cherish this forever! Thank you once again prabu sir and karthi sir for the opportunity!..To answer all your txts and calls yes“ Dilli will be back”👍 pic.twitter.com/uZ6lWX24x3

Karthi also confirmed the news in today’s press meet by saying that the director required only 30 days of shooting for the film.

#Karthi is here for a quick Diwali #Kaithi success meet. He’s ready for #Kaithi2.. He says Dir #Lokesh has asked him for just 30 days to film the sequel 👌👍 the story is ready too.. Sema! pic.twitter.com/IydpYtjpPk

What do you think on this film getting a sequel ?? Comment your views !!

“Are You Seeing Someone ??”, Fan Tried To Flirt With Jemimah !! Received A Fitting Reply From Her !!

India women team’s star Jemimah Rodrigues is popular for her fearless approach to batting. Rodrigues has been performing well for Indian women's team since...