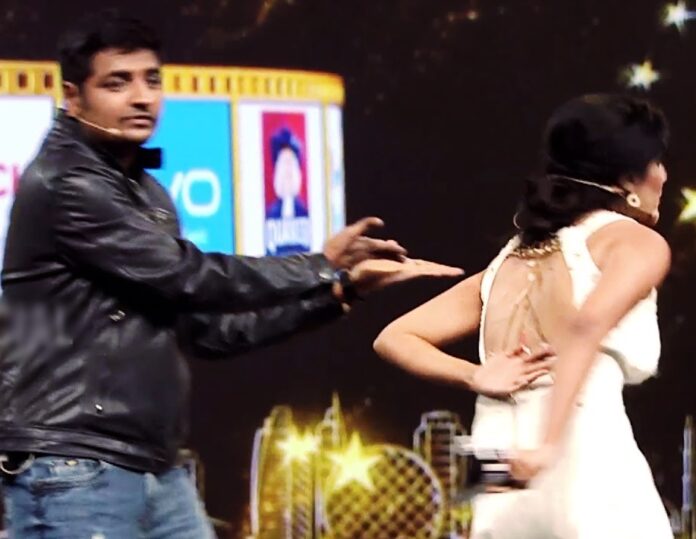 Amidst the controversy that that surfaced surrounding comedy actor Sathish based on a comment he made on stage about actress Dharsha Gupta’s clothes, an old video of the “Naai Sekhar” actor making similar comment based on the attire of actress Dhanya Balakrishnan got resurfaced in the micro blogging social media site.

The incident took place three years ago at the stage of South Indian International Movie Awards. Dhanya Balakrishna who is known for appearing in films such as “Raja Rani”, “7aam arivu”, hosted the show with Sathish with the presence of top tier celebrities such as Trisha, Nayanthara and others.

In what seemed as a scripted skit, Dhanya, after welcoming the audience, saw her co-host Sathish asked him what kind of dress he is wearing which is inappropriate to the climate. Sathish said that he is wearing a jacket and asked Dhanya to read something that was written on the screen.

When she turned to read the same, the actor pointed out Dhanya’a cloth saying “See here, She is the one who should be wearing a jacket”

The three year old video got resurfaced now with reactions slamming the actor referring to a recent incident where he commented on Dharsha Gupta’s attire to get applause.

Check out some of the reactions that the video received most lately :

Days ago, at the audio launch of “Oh My Ghost” movie, Sathish said that Sunny Leone who came from Bombay wore a traditional dress whereas Dharsha Gupta who hails from Coimbatore failed to do the same. Comparing her dress with Bollywood actress Sunny Leone, Sathish made the comment, thinking that it is humorous but it didn’t go well among the public.

When a controversy erupted regarding his speech, the actor released a video saying that it was just a friendly banter that himself and Dharsha Gupta planned earlier. However, Dharsha uploaded a tweet in her Twitter timeline saying that she never planned anything with Sathish and his comment did hurt her. Sathish is yet to respond on the same.

Fan of different actors fighting with each other during festive season is not something new to Tamil cinema. Back then, Fans involved in arguments...