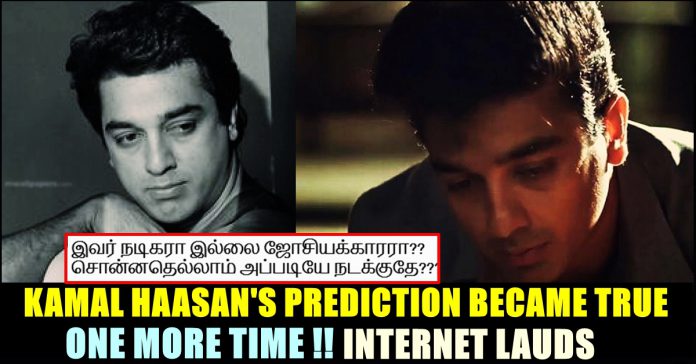 A seven year old video of Kamal Haasan explaining about how harmless DTH platform is, is going viral in social media platforms now as makers of two of the high profile Tamil movies announced their release dates in OTT platform on Friday. After all the furore that took place between Theatre owners and Cinema producers, Suriya’s “Ponmagal Vanthaal” and Karthick Subbaraj’s “Penguin” are going to get release on May 29 and June 19 respectively.

We all know the struggle Kamal Haasan faced years earlier to release his film “Vishwaroopam” on DTH (Direct-To-Home). Now, almost 8 years later, his wish is slowly becoming true as many film producers are considering to release their products in Over the top platforms.

Kamal Haasan who proved himself as a visionary filmmaker in many occasions, has predicted today’s situation accurately 7 years ago, video clippings of which are doing rounds in social media platforms now. Few of his filmy moments became real in previous occasions. (Also Read : 8 Times When Kamal’s Fictional Movie Moments Became True In Real Life !! A True Prophet !!) Netizens across the micro blogging social media site are lauding the actor’s vision.

“You people are scaring to face DTH which is a single medium, there are lot to come in future” says Kamal Haasan in one of a video which became true now with the arrival of online platforms such as Netflix, Amazon, Hotstar, Zee 5, Sun NXT and many more. “It is just a small rain, there is a thunder waiting for us in future” he says in the meeting with Cinema journalists association which took place in 2013.

Kamal Haasan goes on to explain how a film got released in United states and earning profits successfully in the meantime he was struggling to release his Vishwaroopam in DTH. “My film got delayed 7 month with interest due to this issue” he can be seens saying. “If we trust on the strength of people. it won’t go in vain at all. Audience don’t know about the business and all. If they like the content, they will watch it, no matter what the pay is. If they don’t like, they will criticize it, no matter how less their their pay is” he said. “Producers should use the mediums like DTH in right way. Small budget films will gain profits through this” he said in the video.

Many other videos and posts about the actor’s vision are doing rounds in the social media platforms now.

He did say, you can stop me but you cannot stop technology and it is here now. Hope the cinema fraternity leverages the OTT. #PonMagalVandhal #Penguin #PonmagalVandhalOnPrime #PenguinOnPrime pic.twitter.com/omibwcXWrJ

Apart from these films, Atlee’s “Anthakaaram”, Siddharth’s “Takkar” and many other mainstream tamil films are eyeing for a direct online release. In an interaction with Google in 2016, Kamal Haasan said “Though people are witnessing Gods in their daily calendars, they won’t stop visiting “Tirupati Devasthanam”, similar to which, people won’t stop watching movies in cinema halls, due to the arrival of OTT platforms.” to make theatre owners understand how OTT is going to be helpful for small budget films and for Tamil cinema.

Pa. Ranjith Opened About The Message He Received From His First Film Producer !! WATCH

Director Pa. Ranjith is currently busy participating in interviews to promote his upcoming film "Sarpatta Parambarai" which talks about the battle between two clans...